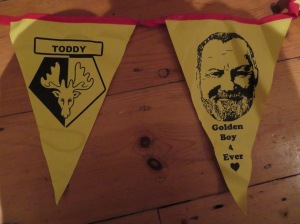 Toddy’s funeral took place on Wednesday.  It has to be said that his family and many friends gave him a magnificent send off and it was fitting that the wake was held in the Captain’s bar at Vicarage Road.  The help given to Toddy’s family by his friends at the club, especially Dave Messenger, has been outstanding and a testament to what he meant to the people there.

Due to some friends travelling in to London from distance and arriving early, I made a late choice to find a pre-match establishment in which to meet up.  So I found myself at 9:50 with a group of other Hornets waiting for the pub to open.  When we were finally admitted, it was only to find that they were not serving beer until 11.  However, the breakfast menu looked good, so I decided to have a coffee and something to eat.  I must say that smoked salmon, avocado and scrambled eggs is not my usual pre-match meal, but it was very nice indeed.  I then headed to another pub (for beer) and met some of our party at the bar.  It was a good crowd that gathered before kick-off, and rather lovely to be joined by Watford’s matchday announcers, Tim Coombs and Emma Saunders, travelling as fans for the day along with Emma’s Watford supporting family.

Gathering for a corner

Despite the weather warnings that had come due to Storm Brian (what sort of name is Brian for a storm?) it was a pleasant walk to the ground.  We saw signs for the Upper Shed so passed through security (a cursory look in my bag) only to find that we were at the entrance to the home section of the ground.  When we reached the away entrance, the security was considerably stiffer.  We had to negotiate repeating phalanxes of stewards before the final search.  I pointed out to the woman searching me that a physical search had not been deemed necessary at the home end, but she was having none of it.  I wonder if they ever find anything (apart from Mike’s Swiss Army knife).

To the seats and Dave M had secured a cracking view for the City Orns and was kindly sitting at the end of our row to keep an eye on us. Team news was just one change from the Arsenal game with Deeney, who had done so well after coming on as substitute, replacing Gray.  So the starting line-up was Gomes; Mariappa, Kabasele, Britos; Femenía, Cleverley, Doucouré, Holebas; Pereyra, Deeney, Richarlison.

After the recent runs of form for both Watford and Chelsea, we travelled to Stamford Bridge in an uncharacteristically positive mood.  But disaster struck after 12 minutes.  The ball clearly went out for a goal kick to the visitors, but the lino wasn’t paying attention.  He hesitated before making the decision, decided to take the advice of the Chelsea fans sitting behind him and awarded a corner. The delivery was taken short and found its way to Pedro who powered in off the far post, much to the anger of the travelling Hornets who let the linesman know exactly what they thought of him.  As did Jose Holebas, who was booked for his trouble.  The home side should have been two goals ahead side soon after as Fàbregas found himself in space with only Gomes to beat, but he tried to chip the keeper who reached up a hand and snuffed out the danger.  There was then a booking for either side, Mariappa for a foul on Hazard and Rüdiger for tripping Richarlison.  Both fouls looked rather soft.  Chelsea then had a couple of half chances.  Pedro tried a shot from distance that flew just wide of the far post.  Then David Luiz tried another shot from distance, but it was straight at Gomes.

Doucoure haring down the pitch to celebrate with the Watford fans

Watford came into the game on the half hour when Cleverley curled a free-kick over the wall and Courtois had to be smart to push the shot wide of the target.  Richarlison then threatened for the first time, firing over from outside the area.  The Brazilian then exchanged passes with Doucouré before shooting straight at Courtois.  At the other end, Luiz tried a shot from outside the area, but Gomes pushed the ball clear.  In time added on at the end of the half, Watford won a thrown-in in line with the penalty box.  I couldn’t believe that the players were taking so much time to take it.  First Femenía left the ball for Holebas, who took his time finding his space, he even had an aborted run-up.  I was sure that he had delayed too long and the ref would blow for half time as soon as he released the ball.  But he didn’t, it dropped for Doucouré, who fired past Courtois and the Hornets were level on the stroke of half time.  Gomes did his usual goal celebration in front of the Watford fans and Doucouré ran the length of the pitch to celebrate with us.

So it was honours even at half time, which was certainly no more than Watford deserved.

Chelsea had a great chance to strike back at the start of the second half, but Mariappa was on hand to turn Azpilicueta’s cross over the bar from close range.  Then Femenía crossed for Deeney whose shot was blocked allowing Chelsea to break and Pedro to send a shot from distance wide of the target.  Richarlison had a great chance to put Watford into the lead as he received a cross from Femenía, but he was a bit off balance and hit it with his left foot so it flew wide.  Had he been able to get it on to his other foot, it would have been in the net.  But the Hornets weren’t to be denied for long as a fantastic move finished with Richarlison finding Pereyra in space and he didn’t miss.  This time, the players were able to celebrate right in front of us before running to the dug-out and celebrating with the manager and the subs (and Pereyra with the medical staff).  It should have been 3-1 soon afterwards as Britos crossed for Richarlison, but the Brazilian headed just wide.  There was another booking for the home side as Morata was cautioned for a foul on Kabasele before being replaced with Batshuayi.  Sadly, Pereyra’s day was over soon after, as he took a knock winning a corner and had to be replaced by Carrillo.  The referee, who had done us no favours all afternoon allowed the corner to be taken before Carrillo came on.  The substitute made an early impression as he received a pass from Deeney before cutting back to Richarlison whose shot was deflected wide.  The home side made another substitution replacing Alonso with Willian.

A corner at the Shed end

With 20 minutes to go, and completely against the run of play, the home side levelled as Pedro crossed for Batshuayi to head past Gomes.  Watford looked to strike back as a Cleverley free-kick was met by the head of Kabasele who, sadly, directed the ball straight at the keeper.  The visitors then had another chance, this time from a corner but, again, Richarlison headed wide.  With 10 minutes to go Silva made rather an odd substitution replacing Deeney with Watson.  Chelsea had a great chance with a low free kick that reached Batshuayi who tuned it over the bar.  At the other end, Femenía’s cross was headed wide by Kabasele.  But it was the home side who took the lead as a cross from Willian reached Azpilicueta who headed home.  My reaction at the time was that this was a travesty.  The Chelsea fans started singing “That’s why we’re Champions’ which did make me laugh.  The arrogance, when they should have been somewhat shame-faced.  Silva made one last roll of the dice replacing Mariappa with Gray.  But it was Chelsea that made the further breakthrough.  There was time wasting both on and off the pitch as the ball was caught by an idiot in the crowd who decided to hold on to it, while Gomes waited for it to be returned.  There were two stewards within feet of the fool, but neither of them moved to allow the game to continue.  But more important for the outcome of the game was a moment of madness on the pitch as Britos dallied with the ball on the edge of the Watford area, then gave it away allowing Batshuayi to advance and score Chelsea’s fourth.  A scoreline that was extremely flattering to the home side. 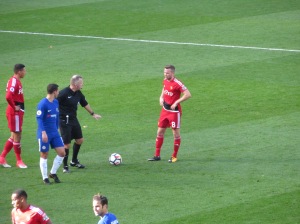 Cleverley lines up a free kick

I was furious at the end of the game.  But we had been our own worst enemies.  In this division you cannot expect to win games if you don’t take your chances.  Watford missed some sitters, while Chelsea were clinical.

But, what the hell, there have been enough occasions in recent years when I have left Stamford Bridge fuming because we had been humiliated.  On this occasion, we were easily the equal of the home side and deserved at least a point.

When we were promoted, I really didn’t believe that we would find ourselves in such a position.  We are sixth in the table on merit, having already played 4 of the “top 6” and only been second best to Manchester City.  So I will continue to enjoy the football whether we win or lose and marvel at what a great team we are currently watching.