Waiting for the ball to drop

It seems like a very long time since our trip to Goodison Park for the first game of the season.  At that time, the memory of our last visit (and the Chris Powell ‘handball’) loomed large, but the spirited draw was the first sign that this would be a much more enjoyable season.  Even though we have been on a poor run of late, it is worth remembering that we are guaranteed to finish higher than in our last two seasons at this level and, while we are not mathematically safe from relegation, it looks highly unlikely that we will get dragged into a fight against the drop.  There was some great news prior to the game as we heard that the U18s had won their league.

While we had been bemoaning our own recent poor form, it was easy to forget that Everton have also been on a bad run.  So it was a bit shocking to see a ‘Martinez Out’ banner unfurled in the away stand before kick-off.

For those of a nervous disposition, the team news did nothing to quell their jitters as Flores had made five changes bringing Paredes, Britos, Holebas, Behrami and Jurado in for Nyom, Prödl, Aké, Suárez and Abdi.  While we had been awful last week, the almost complete overhaul of the defence caused some concern.  So the starting line-up was Gomes, Holebas, Cathcart, Britos, Paredes, Behrami, Watson, Capoue, Deeney, Jurado and Ighalo. 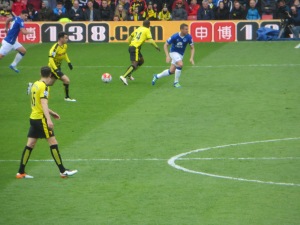 Jurado on the ball

The first action of the game was indicative of what was to follow as Deeney tackled Barkley who collapsed like a spoilt child and won a free kick.  On the positive side, any concerns about the return of Holebas were quelled when he stopped an Everton break with a great saving tackle.  Kevin Friend had set his stall out early by penalising every Watford challenge, so it was no surprise when the first booking went to Capoue for a foul on Barkley, although it was the Watford man who required the longest period of treatment following the challenge.  Watford’s first goal attempt came after quarter of an hour when Paredes intercepted the ball and went on a run before passing to Behrami, he found Jurado who unleashed a fantastic shot that required a decent save from Robles.  When Watson was fouled on the edge of the box, Mr Friend was forced to wave play on as it was he who had taken the Watford man down.  The resultant Everton break was made to a chorus of boos particularly when Gomes had to make a sharp save to deny Deulofeu.  Watford attacked again after Holebas intercepted the ball before feeding Jurado who made a lovely turn, but his pass towards Deeney was too heavy.  Then Paredes found Ighalo whose shot was cleared.  Lukaku tried a shot from distance but, under challenge, he hit it well over the bar.

A move that was started by Ighalo finished with Jurado playing the ball back to Watson who shot straight at the keeper.  In the Watford box, Barry went down looking for a penalty which, fortunately, wasn’t given, the ball broke to Barkley whose shot was caught by Gomes.  Jurado exchanged passes with Holebas on the wing but his cross was straight at the keeper.  Then a cross from Holebas was met by a misdirected header from Ighalo which flew wide.  Just before half time, Watford had a good chance to take the lead as a Jurado free kick rebounded off the wall and Capoue’s follow-up was deflected just wide of the far post.  From Watson’s corner, Holebas headed just wide.  But it was the visitors who took the lead in time added on at the end of the half, as Britos lost out to McCarthy on the edge of the box and he finished past Gomes.  I felt so sorry for Britos, who was clearly devastated at his mistake.  But, at a time when the team needed the crowd to get behind them, one of my neighbours in the Rookery decided that the appropriate response was to boo very loudly.  Not for the first time, I told him exactly what I thought of him.  It made me feel a bit better, but what happened on the pitch next lightened my mood considerably.  Ighalo’s harrying forced Robles to concede a corner.  Ben Watson’s delivery to the far post was met by Holebas, whose header took a deflection before hitting the net and sending the home crowd into raptures.

So we were level at half-time, which was probably fair in an even game of few goal attempts.

The half time shoot out had reached the semi-final phase and was a cracking contest between Sacred Heart and St Paul’s with the latter prevailing during sudden death.  Both teams were applauded off the pitch with an enthusiasm that these contests rarely inspire.

Guedioura lines up a corner

Guedioura had spent the break on the pitch warming up, so it was no surprise when he replaced Behrami at the start of the second half.  Early in the half, irritation with the ref went up a notch as Ighalo was pushed over by Jagielka and nothing was given when Barkley appeared to get the benefit of the doubt every time he went to ground.  The first goal attempt of the half came 10 minutes in and took some remarkable work from Gomes to keep the scores level as he parried a shot from Lennon and then, somehow, prevented Lukaku reaching the loose ball.  At the other end, Watford had a free kick in a dangerous position, Watson played it short to Holebas whose shot went through the wall, but the pace was taken off and it was easy for Robles to gather.  Guedioura went on a great run, played the ball out to Deeney who crossed for Ighalo who couldn’t quite turn it in.  Watford’s second substitution saw Amrabat on for Jurado who had played very well.  Gomes was the hero again as Deulofeu broke into the box, he managed to shoot, despite a challenge from Paredes, and the Brazilian was down to make the save.  Martinez made his first substitution on 65 minutes replacing Barkley (who was booed off by the Watford faithful due to his tedious theatrics) with Tom Cleverley who was applauded on to the field for his Player of the Season turn as a loanee.  Everton threatened again as Coleman ran the length of the field, but his cross was safely caught by Gomes.

Ighalo, Deeney and Capoue challenge in the box

The visitors had a great chance to take the lead as Lukaku played a neat back heel to Lennon whose shot was kept out by yet another superb save from Gomes.  As we reached the last 10 minutes, each side made a substitution with Mirallas coming on for Deulofeu and Suárez replacing Capoue.  Everton could have won the game in the last couple of minutes of normal time as Mirallas won a free kick on the edge of the box.  His delivery was parried by Gomes and hearts were in mouths as Lukaku’s follow-up rebounded off the crossbar.  Lukaku had another chance to snatch a winner as he met a cross from Coleman with a header but he directed it downwards and it was easy for Gomes.  In time added on, it was Watford who had a chance to get the winner as Amrabat played the ball back to Watson whose long range shot took a deflection and appeared to be heading for the top corner when Robles pulled off a great save to keep it out.  Guedioura was the next with a sight of goal, but he shot well over the bar.  Each side had one final half chance to snatch a winner.  First the visitors as Barry met a free kick with a header that was saved comfortably by Gomes.  Then Suárez found Ighalo whose shot was disappointingly soft and easy for Robles.

So, the final whistle went on what had been a very entertaining game of football and a pleasing point for both teams after their recent run of defeats.  Watford had been much brighter than of late and the return of Capoue to a central position did both him and us a favour.

Post-game, I had a quick chat with Mick Smithers, Watford’s Football Liaison Officer, who mentioned that the Everton fans had been delightful.  This was backed up by Karoline the Roadie who said they had been the nicest group of fans to visit Vicarage Road this season.

It is hard to believe that there are only two more home games left in this season but, before the next we have a trip to West Bromwich, a final hurrah at the Boleyn and a semi-final at Wembley.  A lot to look forward to and let’s hope that the team go into them with the positive approach that they took today.