Welbeck and Gray waltzing with the opposition defenders

Due to evening commitments in London last week, my commuting time was at a minimum, this meant that I hadn’t listened to the “From the Rookery End” podcast.  So, I made it my accompaniment for the train journey to Watford and wished that I hadn’t.  When even the ultra-positive Colin sounds exasperated, and that game at Wolves was enough to try the patience of a saint, you know that we are in trouble.

I arrived at the West Herts later than usual to find my sister at the bar.  She had arrived early for a chat and was somewhat put out to find that I wasn’t there yet.  We joined the usual suspects at our table before the Norfolk ‘Orns made an appearance.  They were on one of their days out, which generally means an early start on the beer and shots in the West Herts.  It has to be said that they were already very jolly when they arrived, but their early start meant that there were no pork scratchings in Glenn’s goodie bag to the consternation of all.

Pereyra preparing for a corner

On arrival at the Rookery turnstiles, I was patted down by a steward, I don’t believe that has happened before.  It was noticeable that, as there was only a female steward at that end of the turnstiles, while I was being searched, the men were streaming past unmolested, which was a source of some irritation.  On arrival in the Rookery, we found, as we had for the Swansea game, a pool of water under our seats.  We asked a steward for assistance in clearing it, his solution was to tell us we could find another seat if any were available.  We had seen one of the cleaning staff with a mop and a bucket further down the stand, so I went and asked him to assist us.  This meant that we missed joining in the “Forza” display prior to kick-off.  Even after the man with the mop had done his (much appreciated) thing, the floor was too wet to place my bag down, so I was relieved when the guy that sits next to me did not appear and I was able to use his seat for my bag.  To add insult to injury, when I tried to take a photograph for the blog, I found that my camera battery was drained.  Thankfully I had a charger with me so was able to remedy the situation and just hoped that there would be something worth photographing.

Watford had a great chance to open the scoring in the 8th minute after a terrific run from Pereyra, he put in a low cross for Gray who managed to blast the ball into the Vicarage Road stand when it looked much easier to score.  Soon after, Pereyra won a corner that was taken short but eventually led to a cross by Janmaat that was headed over by Prödl.  There was almost a disaster of our own making at the other end as Cathcart turned a cross from Baldock towards his own goal, but Foster pulled off a smart save to stop it.  The visitors had another chance to open the scoring with a low shot from Fleck, but it was an easy save for Foster.  The Blades threatened again as McBurnie slid in trying to convert a low cross from Basham, but Foster was able to gather.  Doucouré got himself into a great position for a shot, but there was a body in the way of his effort from the edge of the box.  The Hornets had one last chance to take a lead into the break as Prödl met a cross from Cleverley with a header that dropped to Kabasele who tried to turn it in, but Henderson was able to make the save.

It had been an incredibly dull half of football, which had done nothing to improve my mood.  The half time celebrity guest was Alan Smart.  Being reminded of the awful season that he was involved in at this level didn’t help.  The high point for him was scoring the winner against Chelsea.  Unfortunately, the prospect of any similar results this season are currently looking very remote.

The second half started promisingly for the Hornets as a misplaced header dropped to Welbeck who powered downfield with Gray running alongside.  As Henderson came out to meet him, he decided to take the shot himself and it was blocked by the keeper.  From our perspective in the Rookery, passing to Gray looked like a better option but, given his earlier miss, the outcome may well have been the same.  The Hornets had a really good spell, which galvanised the crowd, but they couldn’t fashion a goal attempt worthy of note.  The visitors had the next chance as Robinson volleyed goalwards, but Foster was able to make the save.  Watford made two substitutions in quick succession.  Prödl limped off due to a hamstring injury to be replaced by Dawson, a great shame as the presence of Seb in the back three had been a positive.  Then Gray made way for Deulofeu.  In between the substitutions McBurnie was booked for a foul on Kabasele.  Soon after being cautioned he was replaced by Mousset.  Next there was a break in play due to an injury to Holebas.  José was down for a while being treated but, once back on his feet, he walked off the pitch while giving the evil eye to his assailant, who had my sympathy.

The visitors made a second substitution, replacing Robinson with Billy Sharp, who was once heralded as “the answer” by a section of Hornet fans.  Flores also made a change bringing Sarr on for Welbeck.  Deulofeu impressed as he ran to keep an impossible ball in play, advanced and crossed, but it was just too high for Doucouré and Henderson was able to make the catch.  Deulofeu created a half chance as he cut in from the left and tried a shot, but it was easy for the keeper.  As the clock struck 90 minutes, a break by Deulofeu was stopped by a foul by Lundstram, who was shown a yellow card for his trouble.  The Hornets had a great chance to snatch the three points when the free kick from Deulofeu was met by the head of Dawson, but Henderson managed to make the save.  There was one final chance for the Hornets as Doucouré was urged to shoot by the crowd, but the shot from distance was woeful and nearly hit the corner flag.  So, the game ended goalless.

As I walked back to the West Herts, I bumped into another regular.  He was very philosophical, reasoning that we’ve both been watching Watford for a long time and have seen a lot worse than this.  He was right, but the current winless streak is still a great cause for concern. 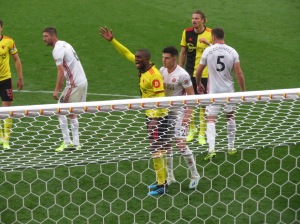 Man of the Match Kabasele calling the shots

The main positive from the afternoon was that this was the first clean sheet since February.  Our defence has been dreadfully leaky and we looked much stronger with three at the back, although this improvement at the back may have been helped by the opposition being Sheffield United.  Still, Prödl had a great game, he is much more of a commanding presence at the back than either Cathcart or Dawson.  Kabasele was immense and was named man of the match by the sponsors and thoroughly deserved it.  The strikers are still struggling, but at least they are making chances and we really should have won this game.  Sadly, I have felt that after most of the games this season, Brighton and Man City notwithstanding.  Most of the teams that we have played this season have been poor to mediocre and yet we find ourselves with only 3 points from 8 games.  The big problem with this team, as many have been saying for weeks is a lack of confidence and leadership.  Troy is badly missed and you can’t help thinking that a scrambled goal or one bouncing off someone would make a huge difference.

So we go into an international break for a much needed breather and the hope that we will soon see an upturn.  My dear friend, Don, always urges us to “Keep the Faith”.  It is becoming increasingly hard.