This game against Spurs was originally scheduled as a Watford home game, but it was decided to change the September fixture to be played at Vicarage Road in order to give the hosts time to get their ground ready.  So it was with some irritation that this fixture was confirmed as being played at Wembley, which is a terrible venue for a league game.

Our recent pre-match pub of choice was deemed to have gone too up-market, so we met at an alternative venue which was actually equally expensive and didn’t have reindeer on the menu, although it did have a venison vindaloo pie, which went down very well with some in our party.  After a very pleasant meal, we headed for Marylebone to get the train to Wembley and were rather surprised to find that it was far from packed and we were able to secure seats for the short journey with no problems.

During the afternoon before the match, the message had gone out that it was no longer permissible to take rucksacks or laptop bags into the ground and we had been warned to arrive an hour before kick-off in order to give us time to get through security.  Arriving just before 7:30, we had the freedom of Wembley Way and there was no queue to get into the ground, although the warning regarding bags had to be taken seriously as there was a measuring device that was in use to catch out those trying to flout the bag size rules. 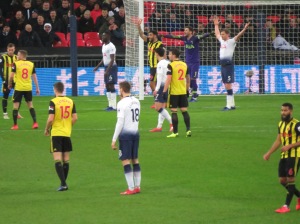 Team news was that Javi had made three changes from the Burnley game with Janmaat, Cathcart and Hughes in for Femenía, Kabasele and Sema.  So the starting line-up was Foster; Janmaat, Cathcart, Mariappa, Holebas; Hughes, Cleverley, Capoue, Pereyra; Deulofeu and Deeney.  With the team announcement comes the shirt colour and I was disappointed to see that the team would be playing in yellow as I only had my green shirt with me.

About 10 minutes before kick-off, there were exhortations over the tannoy and on the screens for fans to “Take your Seat.”  When we entered the arena, we could see why, as the home areas were very sparsely populated indeed.

Prior to kick-off there was a minute’s reflection for the missing Cardiff striker Emiliano Sala and the pilot of the missing aircraft, David Ibbotson.  So very sad. 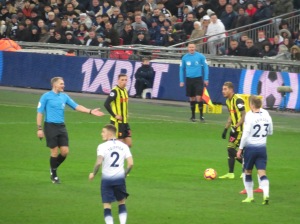 Holebas and Pereyra line up a free kick

Like most Watford fans, I had been gutted when South Korea were knocked out of the Asian Cup meaning that Son would be available for this fixture.  He certainly showed no sign of jet lag as he made an early run into the Watford box but, with Cathcart in close attendance, the ball ended up in Foster’s hands.  Watford also launched an early attack as Janmaat put in a decent cross and Deeney was just short of providing the finishing touch.  Son again caused concern for the Watford defence with a turn and shot that flew just wide of the far post.  The first on-target effort came as a shot from Eriksen took a nasty double deflection which sent it goalwards, but Foster was alert to the danger and made the save.  Then Eriksen found Son in the box but, as he tried to round the keeper, Foster was able to save at his feet. Watford had a half chance as a shot from Deeney was blocked and fell to Janmaat whose shot was high and wide.  Vertonghen then tried his luck but Foster was quickly out to clear.  At the other end, Deulofeu did really well to make space for himself on the edge of the box but his shot was just wide of the target.  Son threatened again with a curling shot, but Foster was right behind it.  Holebas was the next to try his luck with a shot from distance that was deflected over the bar. 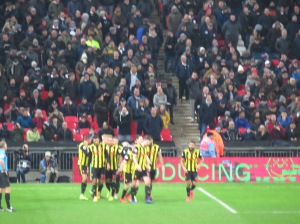 Watford took an unexpected lead as, from a corner, Cathcart rose to head past Lloris.  It all looked a bit scrappy from the other end of the ground, but a goal is a goal and the celebrations were joyous.  Almost immediately, the home side had a chance to break back as Son crossed the ball in front of the Watford goal, but there was no Spurs player on hand to turn it in.  So we reached half time a goal to the good in what had been a pretty poor half of football.

Spurs made a change at the break bringing on Moura for Aurier.  Llorente should have equalised early in the second half as he met a cross from Sissoko with a close range shot, Foster made the block but it rebounded to the Spaniard who should have buried it, but somehow managed to divert the ball over the bar when it would have been easier to hit the target.  At the other end, Deulofeu had a great chance to increase the lead but his shot flew just wide of the far post.  The first substitution came on the hour mark as Success came on for Deulofeu who looked very unhappy at being replaced.  The home side threatened again as a free kick from Eriksen was deflected goalwards and had to be blocked on the line by Foster, Alderweireld played the ball back into the box but Llorente headed wide of the near post. 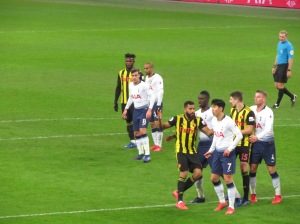 Gracia made his second substitution replacing Cleverley with Wilmot who was in action almost immediately clearing a shot from Rose off the line.  The second Spurs substitution saw Trippier coming on for Sissoko.  Watford’s first chance of the half came on 70 minutes, with a shot from Deeney that found the side netting.  A dangerous looking break by Moura was stopped by Capoue who was booked for the foul.  Watford had another chance to increase their lead as Deeney headed the ball down to Success but the shot was just wide.  Pochettino made his final change bringing Lamela on for Vertonghen.   With 10 minutes to go, Spurs finally scored an equaliser as Son, who had been a menace all evening, broke into the box and finished past Foster.  Our hopes of holding on for a point were dashed with three minutes to go as Llorente, who had been wasteful all evening headed a cross from Rose back across goal and past Foster into the net.  It was a poor goal to concede, Rose was given far too much space and Foster possibly could have done better, but it would be churlish to criticise him as he had been magnificent all evening.  There were four minutes of added time, but neither side looked likely to score again.

So the whistle went on a defeat that was probably deserved and only really galling as we had held the lead for so long.  It was a poor game, one that won’t live long in the memory.  It has to be said that Spurs are a shadow of the team that they were a couple of seasons ago, they looked very ordinary, with the exception of Son who put in an excellent showing as he always does.  Their stay at Wembley has done them no favours at all and the fact that the crowd was below 30K shows what the fans think of the venue.  I am just happy that I won’t have to go there for another league game.  Watford were not great going forward, thankfully we had goal machine, Cathcart, to save our blushes.  But, there was another decent defensive performance and Ben Foster continues to be magnificent in goal.  At the end of the day, I can only hope that a narrow defeat to Spurs will be considered a disappointing result for some time to come as that will mean that we are a team looking up the table rather than down.