When the draw for the fourth round was made and we were paired with either Blackburn or Newcastle, the waiting game started.  Train tickets could not be bought until we knew where we would be playing.  Also, as the match tickets were going on sale the morning after the replay, I had the task of drawing up two lists of attendees dependent on the outcome.  There were more takers for Blackburn, even though the consensus was that they would be a tougher opponent than Newcastle.  But Newcastle it was (again).

I left London bright and early and found myself on the same train as a fellow member of WML who I had notified of the pre-match pub, so I met up with him to ensure that he found it with no difficulties.  When we arrived, a couple of our party were already at the bar and had grabbed a table in the little enclosed area.  A well-dressed older couple then arrived and sat down to do their crossword.  This was shortly before a large contingent of Happy Valley and North West Horns descended and ruined their peace.  To be fair to them they took being surrounded by football fans in their stride and the crossword was duly completed. 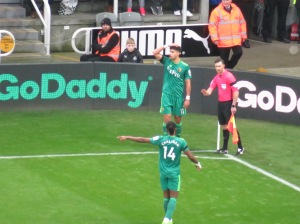 Masina preparing for a corner

Team news was that Gracia had made wholesale changes, although this was hardly a second string as it did include the return of Cathcart and Hughes from injury as well as a number of others who have featured in the league this season.  So, the starting XI was Gomes; Janmaat, Cathcart, Britos, Masina; Quina, Wilmot, Chalobah; Success, Gray, Hughes.  We had been aware of the inclusion of Wilmot before the team was announced as his grandparents had bumped into Mike outside the pub.  Criticism by both pundits and fans of Watford’s changes ignored the fact that Newcastle, who have both a weaker team and squad than us, had made 7 changes of their own.  While I fully agree that we should be making every effort to advance in the cup, my feeling was that this was a team that had enough quality to beat Newcastle and I was very much looking forward to seeing more from Quina and Wilmot.

When we arrived at the away end turnstiles, the woman performing the search asked if I would be using the lift.  I wasn’t sure whether it was my heavy rucksack or my advancing age and girth that prompted the question, but assured her that I would take the stairs.  She then commented that she always takes the lift, so I decided not to take offence.  As we scaled the 14 flights, I was chatting to a friend, so lost track of our progress and was just wondering whether to stop for a much needed breather when I saw the top floor appear so soldiered on.  It always feels like an accomplishment to arrive at the top without the use of supplemental oxygen.  As we took our place in the stand, it was clear that there were plenty of empty seats in both the home and away ends.  Our allocation of 6000 was never going to be filled, but the temptation of £10 tickets had not attracted a huge home following either. 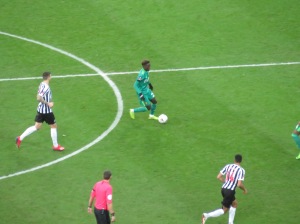 Quina on the ball

Watford made a very bright start with a brilliant shot from distance from Quina which needed a decent save from Woodman in the Newcastle goal to keep it out.  The next chance of note came from a free kick just outside the area which Chalobah hit just over the bar.  From that point, there was nothing worth retrieving my notebook for until the 23rd minute when Janmaat hit a terrible shot that was way off target.  Pete reckoned that his playing badly was a deliberate ploy to stop the home fans booing him.  Watford had a great chance to open the scoring when Quina played a lovely pass to Hughes, who slipped a through ball into the path of Gray but the shot was wide of the target, although it wouldn’t have counted as the offside flag was up.  Newcastle had offered little going forward and an attempt at a break by Murphy was stopped by a very good tackle from Britos.  And that was it for the first half.  The announcer on the pitch introducing the half-time competition summed it up when he said, “Ladies and gentlemen, if any of you are still awake …..”

Gray being congratulated on his goal

There was also a bright start to the second half as Hughes played a ball over the top for Gray to run on to, he broke clear of the defence but shot high and wide when he should at least have tested Woodman.  Success, who was having a frustrating afternoon, then lost out to a defender and clearly felt as though he had been manhandled (he hadn’t) so collapsed dramatically in the box and then had to get up and get on with it when it was clear that nobody cared.  It was as well that I was in the top stand half a mile from the pitch at that point as I was tempted to give him a slap.  Another chance went begging after some nice play around the edge of the Newcastle box finished with the ball with Gray who ran into a couple of defenders and lost the ball.  The first booking of the game went to Wilmot for a foul on Joselu.  The breakthrough for the Hornets came just after the hour mark as Hughes played a gorgeous through ball to Gray who finished past Woodman and continued his run to celebrate in front of the Watford fans up in the gods.  Peñaranda had been readied to come on, presumably for Gray, just before the goal.  He immediately put his bib back on.  Watford’s second booking went to Chalobah for a foul on Kenedy.  The home side should have equalized when Manquillo went on a decent run, Gomes came out to meet him but failed to stop the shot, however the impeccable Wilmot was on hand to head the ball off the line.

Success celebrating his goal in the distance

Gracia made his first change on 68 minutes finally bringing Peñaranda on for Gray.  Soon after, Chalobah broke forward but, with options to either side, played a through ball to where Gray would have been had he not been substituted a couple of minutes earlier.  Benitez made a double substitution bringing Pérez and Atsu on for Murphy and Ritchie.  The decision to replace Ritchie was greeted with loud boos from the home fans.  Britos was then booked for a foul on Pérez.  Each side made a final substitution with Schär replacing Fernandez for the home side and Chalobah making way for Capoue for the Hornets.  Newcastle had a chance to grab an equaliser in the final minutes of normal time when a defensive header fell to Pérez on the edge of the box from where he shot over the target.  The home side attacked again but a cross from Atsu was easily gathered by Gomes.  Watford made certain of their place in the fifth round with a lovely goal that started with Peñaranda playing the ball out to Quina, his cross found Success in space in the box to finish from close range and make me feel ever so slightly guilty for moaning about him all afternoon.  The home side had a chance to grab a consolation as Joselu crossed for Pérez, but his shot missed the target and the final whistle went on a comfortable win for the Hornets.

Chalobah getting back to his best

The heavens had opened towards the end of the second half, so we were absolutely drenched by the time that we reached the pub at the station.  As we sat down with our drinks for the post-match analysis, the most astute observation was that it appeared that two moments of quality from a different match had been inserted into a dreadful game.  The best cup ties are blood and thunder games where all of the players appear desperate to win.  This was certainly not one of those, but Watford had done enough to deserve the win and there had certainly been some bright points.  As he has been in every performance so far, Quina was a joy to watch.  He plays with a confidence that belies his years, has a wonderful touch and a brilliant eye for a pass.  I found myself almost purring with delight every time he got the ball.  Wilmot again showed what a great prospect he is.  He started the game playing in a defensive midfield position but later moved into the centre of defence allowing Masina to play further forward.  In both roles, he was composed and appeared totally in control of his surroundings.  He really does look like a young Cathcart and having two of them in the squad is something to treasure.  Of the players returning to first team action, Britos put in a decent shift in the defence and Chalobah put in the best performance that we have seen since his return.  He looked far more comfortable and performed the midfield fulcrum role with some assurance.  That was very pleasing to see.

While the game won’t last long in the memory, it does mean that we are in the fifth round of the cup and, with many of the top teams already out of the competition, this seems like a great opportunity to advance.  I would love a trip to Newport or Barnet/Brentford in the next round.  I just hope that we don’t draw another Premier League team.

While on the way home, I received a message from Pete F that just said “Lucky sea shells.”  I confess that having bought a new coat last weekend, I was superstitious enough to ensure that my shell was transferred and was gratified when Pete B showed that he had also brought his.  Those shells deserve a cup run, I hope that those making the draw agree.