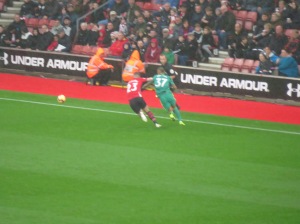 Another Saturday, another away game.  This week the somewhat shorter trip to Southampton.  Due to engineering work, there was no easy train route to the station nearest to the pub.  My last experience of trying to get a taxi at Southampton Central had been hideous so, when I arrived and left the station by the rear entrance, I decided to walk the mile and a half to the pub.  I had a brief moment of regret as the rain started, but it soon cleared and I arrived feeling very deserving of my pint and lunch.  As it did last year, the heavens opened in time for us to leave for the walk to the ground and, despite Alice kindly sharing her umbrella, I was properly soaked by the time we reached the ground.  Pete’s comment to the local Police officer that it always rained in Southampton was met with the response that we must have brought it with us as it had been lovely the previous week.

Team news was that Gracia had made only the one enforced change with Chalobah coming in for the suspended Capoue.  So the starting line-up was Foster; Holebas, Cathcart, Mariappa, Femenía; Pereyra, Doucouré, Chalobah, Hughes; Success, Deulofeu.  It was good to see Chalobah back and I couldn’t help wondering whether Capoue, who has been excellent so far this season, would live to regret giving his place away. 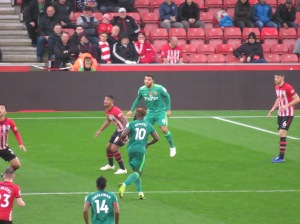 Deeney waiting for a ball into the box

Prior to kick-off there was a minute’s silence to mark the centenary of the end of the First World War which was accompanied by a rendition of The Last Post.  The only other sound that could be heard was the rain on the roof of the stand.

Watford started well and had an excellent early chance when Femenía released Deulofeu who broke into the box, but his shot was blocked.  Deulofeu had another chance soon after, this time with Success as provider, but the shot flew over the target.  Then Success burst forward and tried his luck himself, but his shot was deflected over the bar.  The home side had their first chance after 15 minutes with a shot from distance by Gabbiadini that flew over the bar.  Then, from a corner, Hoedt headed goalwards, Foster parried and Cathcart headed out conceding another corner.  From the delivery, the danger appeared to have passed when Pereyra claimed the ball, but instead of putting a boot through it, he dwelled too long, Ings dispossessed him and found Gabbiadini who finished past Foster.  Very frustrating after the bright start that the Hornets had made to the game.  The novelty of the lead for the home fans was reflected in the chant of “We scored a goal.” 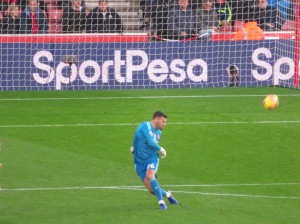 Watford should have struck back almost immediately as Deulofeu picked up a misplaced pass and broke forward but, instead of shooting, he tried to play Success in and the pass was intercepted.  A lovely passing move by the Hornets finished disappointingly as Pereyra’s cut back was just behind Deulofeu.  At this point, the Saints fans regaled us with a chorus of “You only came for the weather.”  Oh yes!  Success released Deulofeu again but, when he found a position from which to shoot, the angle was narrow and the shot was blocked.  At the other end, a Yoshida header from the edge of the area flew wide of the target.   I thought we had the equaliser as a lovely curling shot from Pereyra headed for the bottom corner, but McCarthy was down to parry.  Almost immediately there was a similarly good chance for the Saints with a shot from Armstrong that was saved by the legs of Foster.  The first booking of the game went to Bertrand for a foul on Doucouré.  With 6 minutes to go until half time, each side made a substitution, presumably due to injuries, as Deeney replaced Hughes for the Hornets and Austin came on for Ings for the home side. 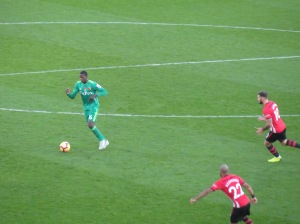 Doucoure on the ball

The half time whistle went with the home side leading by a goal and, yet again, Watford fans were feeling frustrated at the wasteful finishing as, like last week, Deulofeu could have had a hat trick before the break.  There was a similar problem with finishing for one of the teams taking part in the half time relay around the pitch.  The lad who was well in the lead shot wide of the far post allowing his opponent to catch up, dribble the ball to just in front of the goal and drop to the ground to head the ball over the line.  Cheeky so and so, but his opponent gave him the opportunity.

The first chance of the second half fell to the home side as Gabbiadini tried a shot from distance that just cleared the crossbar.  At the other end, Success did well to battle his way down the right wing before crossing for Deeney whose close range shot at the near post was smothered by McCarthy.  The first booking for the visitors went to Chalobah who was cautioned for pulling Redmond back as he tried to escape.  The same two players then tussled again in the Southampton box, on this occasion the travelling Hornets were shouting for a penalty as Chalobah went down under a strong challenge from Redmond, the ball broke for Pereyra whose shot was blocked and the referee pointed for a corner instead of to the penalty spot.  The Watford fans were baffled and Deulofeu was incandescent with rage and was shouting at the linesman, which seemed to be a pointless exercise. 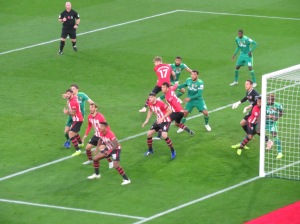 Southampton appeared to have scored a second as Austin shot past Foster.  The celebrations continued for some time before any of us noticed that the linesman’s flag was raised and the goal had been disallowed.  What a relief.  Gracia then made a second substitution bringing Gray on for Pereyra, who had a disappointing afternoon.  The Hornets had a decent chance to draw level as Deulofeu chipped a cross for Deeney, whose back header was caught by McCarthy, although the flag was up for this one as well.  Deeney then found Gray in a good position, but he kicked the ball into the ground so it lost momentum allowing McCarthy an easy save.  Mark Hughes made his second substitution bringing Ward-Prowse on for Armstrong.  Southampton threatened as Yoshida appeared to connect with a cross, but Holebas made enough contact to put it out for a corner. Femenía then had a chance from a decent position but volleyed over.  I didn’t see what prompted the altercation, but Femenía and Redmond squared up to each other.  Seeing this, Deulofeu belted over and angrily pulled Redmond away.  Others have described this as breaking up the confrontation, but Deulofeu had seemed to be spoiling for a fight all afternoon.  He had rowed with the referee after he felt he’d been fouled early in the game, then with the lino when the penalty wasn’t given and his aggressive pull on Redmond was well deserving of a yellow card. 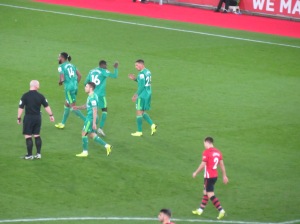 Doucoure congratulating Holebas on his goal

Watford grabbed an equaliser with 9 minutes to go as Deeney found Gray in the box, he passed back towards Doucouré and, just when the chance appeared to have gone, the ball bounced off Deulofeu and fell to Holebas whose shot took a deflection and beat McCarthy to send the travelling Hornets into raptures.  Southampton had a chance to break back immediately but Gabbiadini’s shot from outside the box was stopped by Foster.  The Hornets could have had a winner as a Holebas corner was headed goalwards by Gray, but it came back off the bar.  The home side made a final substitution bringing Obafemi on for Redmond.  The Hornets were pushing for the winner in added time, so it was very frustrating to see a powerful shot from Success rebound back off Deeney.  The captain tried to make amends by crossing for Gray, but the shot flew wide and the final whistle went with the points shared.

It was probably a fair result, although Charlie Austin didn’t agree.  His interview on Match of the Day berating the referee for disallowing his goal was brilliant for its passion.  Someone set it perfectly to Blur’s Parklife and it was great to see Austin himself tweet #Parklife in acknowledgement.  However, he had overlooked the fact that Watford should have had a penalty and that Redmond may have seen red for the challenge, which would have set up a completely different game.  It was another odd performance from the Hornets.  Deulofeu made some brilliant chances, failed to take any of them and then almost got himself sent off with a series of displays of petulance.  Capoue was greatly missed in the midfield.  Chalobah is not match fit and did nothing to indicate that he should continue in that role.  The passing was sloppy and the team seemed to lack leadership until Deeney came on.  Troy does not always earn his place on footballing grounds, but his leadership is greatly missed when things are not going well and there was a clear improvement when he was on the pitch.

But, for all our disappointment at the outcome of the last two games, there were a series of odd results over the weekend, so this result still sees us sitting in 7th place in the table equidistant from the top and the relegation zone which is fine with me.

3 thoughts on “Controversy in the Rain”