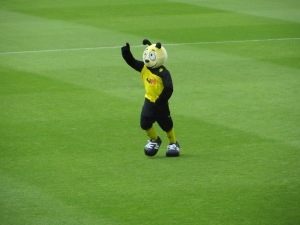 After a trio of Sunday afternoon games, we returned to a Saturday kick-off, although it was not until 5:30pm, so still a disruption to the routine.  When kick-offs are moved, I always have a fear in the back of my mind that I have the time wrong and will miss the game. This wasn’t helped when I watched the rather sweet NBC advertisement for the game which featured a little girl answering questions from her friend about why she is a Watford fan.  At the end, they announce that kick-off is at 12:30 and I had a brief moment of panic before I realised that this was the time on the East coast of the US.  This piece heavily featured Harry Hornet, which was rather sad following the announcement this week that he was hanging up his oversized boots.

He has provided the fans with a lot of entertainment over the years and will be greatly missed.

Due to the late kick-off and an appointment in Hemel the next day, I decided to stay in Watford overnight and, as I checked in, the American couple in front of me were asking about where to go for the pre-match atmosphere.  It turned out that this Man United fan had turned up in Watford without a ticket.  A risky ploy given the relatively small capacity at Vicarage Road. 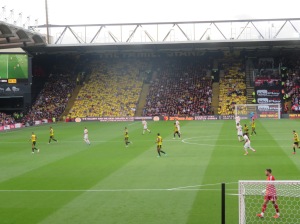 I was in the West Herts bright and early to join Don who, needless to say, had been there since before the doors opened.  He does like to make sure that he is in place in plenty of time for kick-off.  We suspect that, between games, he sits quietly in a corner where they keep him going with regular cups of tea.  It was a day to remember absent friends as it would have been GT’s 74th birthday and Toddy’s anniversary is this week.  While there was little expectation that our 100% record would continue, we had to hope that the lads would still do them both proud.

As we approached the ground, the touts were out in force on Vicarage Road, a very distasteful sight, but one that would have been welcomed by the young American that I met at the hotel.  When I went to buy a programme from my usual seller, I was a little concerned to see a young lad in place of the usual woman, so asked after her to find that she was absent due to a hen night.  I was mightily relieved.

As we took our seats we were greeted with impressive stripes of yellow and black in the family stand and the SEJ, as the club had put yellow and black t-shirts on seats to further encourage the fans to join in with the ‘Stars in Stripes’ that we have come to love this season.  I was actually amazed at how many people had donned the t-shirts.  It looked great.  Prior to kick-off, Emma congratulated Javi Gracia on both the Manager of the Month award and the League Managers Association Performance of the Week for the Tottenham game.  As he took the applause of the crowd, there was that niggling worry that the curse of the MoM award would kick in.

Pereyra on the ball

Team news was, unsurprisingly, that the starting XI remained unchanged for a fifth match in a row so the line-up was Foster; Holebas, Kabasele, Cathcart, Janmaat; Pereyra, Capoue, Doucouré, Hughes; Deeney, Gray.  Manchester United featured former Watford favourite, Ashley Young, who has sadly become a villain for the crowd after his “in your face” goal celebrations in front of the Rookery on his last visit.  The visitors were sporting pale salmon pink shirts that appeared to be the result of the kit man leaving a red sock in the machine when washing a white away kit.

The visitors started the game strongly with Foster being called into action in the second minute when Sánchez found Lukaku in the box, but the Watford keeper dived at his feet to avert the danger.  Watford’s first chance came soon after as a clearance fell to Doucouré whose shot was wild and wide of the target.  United’s next chance came through a shot from Pogba, but Foster was down low to save.  At the other end Hughes turned and shot, but it was an easy catch for de Gea.  At this point, there was a very loud chorus of one Harry Hornet.  Watford had a terrific chance to take the lead after some interplay between Pereyra and Deeney, the Watford captain’s shot required a smart save from de Gea to tip it over the bar. 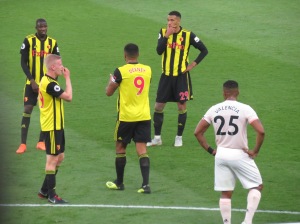 United had the ball in the net in the 24th minute as Sánchez finished from close range, but the flag was up for offside.   Sánchez threatened again on the half hour, running into the box and hitting a shot that was pushed over by Foster.  The first booking went to Capoue for a rather innocuous trip on Lingard, which seemed harsh given some of the challenges that had gone before.  The visitors took the lead after 35 minutes when Lukaku chested Young’s cross home.  From the Rookery, there were (erroneous) shouts of offside.  Holebas was also unhappy at something about the goal and was booked for his protest.  Watford had a wobble after the goal and United could have had a second from a Pogba shot, but Foster pulled off a terrific save.  But the visitors scored a second within 3 minutes as a corner was flicked on by Fellaini to Smalling who controlled on his chest before volleying past Foster.  The visitors had a chance to increase their lead further in time added on at the end of the half as Lingard crossed for Pogba whose snapshot was kept out by a brilliant save from Foster.  So we reached half time two goals down, which seemed slightly harsh but was the result of an uncharacteristically shaky spell after the first goal was scored.

The half time guest was Peter Kennedy who, it has to be said, was totally unrecognizable.  He works as an accountant in local government in Northern Ireland now, not a typical career path for a former Premier League footballer.

Both teams emerged promptly for the second half but were kept waiting by the officials.  Having toured the ground recently, I can assure you that it wasn’t the comfort of the referee’s room that detained them.

The wall jumps as Pereyra takes a free kick

The first chance of the second half fell to the Hornets when Pereyra won a free kick and took it himself, but his shot was over the bar.  The Hornets almost made the breakthrough as Holebas delivered a corner into the box, but Smalling beat Kabasele to the header and it went out for a corner.  The Hornets pulled one back after 65 minutes as Doucouré beat a defender and pulled the ball back for Gray who finished brilliantly past de Gea.  There was minimal celebration before the Watford lads ran back to the centre circle for the restart.  Game on!!  A couple of minutes later, there were shouts for a free kick as Pereyra was fouled on the edge of the area, but Mike Dean waved play on.  With 20 minutes remaining, each side made a change with Lingard making way for Martial for the visitors and Femenía replacing Janmaat for the Hornets.  Femenía’s first act was to play a lovely cross for Pereyra, but Valencia took the ball off the foot of the Argentine.  Pereyra then laid the ball off for Doucouré, but the shot was well over the bar.  Matić was booked for a foul in the build-up.  The central defenders came into their own as Craig Cathcart made a brilliant sliding tackle as Sánchez appeared to be through on goal.  Then Martial was prevented from shooting by an equally wonderful tackle from Kabasele. 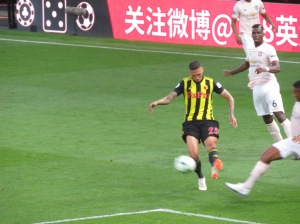 There was a rash of late substitutions as McTominay replaced Sánchez for United and Gracia brought Masina and Success on for Holebas and Cathcart, both of whom left the field to appreciative applause.  Doucouré had impressed in the second half, although his shooting had been suspect, but he did brilliantly with a curling shot that de Gea just managed to hold.  There was a paltry 3 minutes added at the end of the game, most of which seemed to be taken up by Valencia taking an age to leave the pitch when being replaced by Bailly and then Matić leaving the field equally slowly after being shown a second yellow card for a foul on Hughes.  Foster came up for the free-kick, and it looked as through Watford would save a point as the delivery from Hughes was met by the head of Kabasele, but de Gea appeared from nowhere to make the save.  There was one final chance for the Hornets as Masina’s corner curled across goal and just past the far post, so the Hornets went down to their first defeat this season.

Fair play to the Watford fans who chanted passionately for their team after the final whistle.  Given that the Hornets had been behind for the whole of the second half, it was a testament to their performance that Occupation Road was totally packed at the end of the game as the Watford fans had stayed to the end.  It was a terrific second half performance which deserved a point.  As has been the case in every game so far this season, it was a terrific team effort but Cathcart and Kabasele continue to impress.  It seems time to resurrect the “Cool as Craig” t-shirts for our unfussy, unflappable defender.  Deeney and Gray also continue to link up well and Andre’s goal was terrific.

Back to the West Herts and Glenn had picked up some unwanted yellow shirts, so this Rookery resident was able to take one home.  The consensus of the post-match discussion was that, while we were all disappointed at the result, it had been a very impressive performance and we matched Manchester United all over the pitch.  We were a very content group of Hornets.  Our recent performances have shown that we have nothing to fear in this division this season, and that is certainly not what Watford fans were expecting when the season started.  Long may it continue.