After my complaints last week about the ticket office being unhelpful in our attempts to renew my niece’s season ticket, I am pleased to report that, thanks to help from Richard Walker and Dave Messenger, it was all sorted out on Monday and Amelia has secured her seat for next season.

On to this Saturday and I left London ridiculously early, taking the 8:33 out of King’s Cross.  This proved to be a very good decision as the train an hour later was subject to long delays that would have severely restricted my time in what was a fabulous pub.  After a pleasant journey, I arrived to find Harold Wilson in the square outside the station draped in an EU flag with a placard declaring his support for continued membership.  It was then a short walk to the pre-match pub where the beer was fabulous and the pies were superb.  I chose the moo and blue, which was as meaty and cheesy as you could wish for and accompanied by lovely, thick, caramelised chips, peas and onion gravy.  Others in our party who tried the goat curry pie were equally fulsome in their praise of the food.

The pub was also hosting an “At Your Place” event, which was packed out and, by all accounts, went very well.  A special treat for the NE/NW/Yorks Hornets was the presence of Tony Coton, who came and said hello to us afterwards.  He looked unsure about leaning across a table full of beer glasses to give me a kiss, but I wasn’t taking no for an answer.

The walk to the stadium was everything I love about that time before the game.  As the crowds merged, there was that sense of anticipation that builds when you don’t quite know how the afternoon will pan out.  When we arrived by the away turnstiles, we found a huge queue in front of us, but, thankfully, we were soon through security and took our seats just in time for kick-off.

Team news was the very welcome return of Cathcart in place of Holebas, who had taken a knock during the week.  Otherwise, the Hornets were unchanged from the last game, so the starting line-up was Karnezis; Mariappa, Prödl, Cathcart, Janmaat; Doucouré, Capoue; Femenía, Hughes, Pereyra; Deeney.  Huddersfield was captained by former Watford hero, Jonathan Hogg, who certainly still has a place in my heart.

The game started with the home side dominating possession, although the first goal attempt didn’t come until the 18th minute when, from a corner, Mounié headed the ball down for Quaner, Karnezis managed to block the shot, but the flag was up for offside anyway.  The Terriers had another chance soon after as van La Parra crossed into a danger area, but Janmaat was on hand to put the ball out for a corner just before being booked for an earlier foul on Mooy.  Watford’s first real attack came in the 27th minute when they won a corner, but Pereyra’s delivery was poor and went straight out of play.  The visitors followed up with a nice passing move, but it finished with a wayward shot from Deeney that was deflected for a corner.  Again the delivery of the set-piece by Pereyra was dreadful and the ball flew out of play.  It was not the Argentine’s day as he made an attempt to rescue a ball, fell while challenging and was booked, apparently for simulation, which seemed odd as, from my vantage point, he just appeared to have missed a tackle.  Pereyra redeemed himself by playing a lovely pass to Doucouré but the shot was straight at Lössl in the Huddersfield goal, so was easily saved.  A Pereyra free-kick was pounced on by both Deeney and Doucouré, they seemed to get in each other’s way, but the skipper touched it on and Abdoulaye managed a shot that was deflected into the side netting.  That was the closest that either side came to a goal in a half in which the final action was a booking for Zanka for a trip on Pereyra.

It had been a strange first half, there was a lot of running with very little in the way of either goalmouth action or quality.  Huddersfield had dominated possession but had yet to test Karnezis.

The second half also started slowly, the first action of note being a free kick that was played short to Hughes, but his delivery was poor and flew wide of the target.  Each side made a substitution around the hour mark.  First Femenía made way for Richarlison.  Then Ince came on for Quaner to boos from the travelling Hornets.  The visitors had a decent looking chance (at least in the context of this game) as Deeney played in Hughes but, while trying to avoid challenges, he was unable to get a shot in and the ball rolled through to Lössl.  There was a half chance for the home side as a shot from Mounié was blocked by Doucouré.  Then van La Parra tried his luck with a curling shot that was well wide of the target.  Huddersfield made their second change bringing Depoitre on for Mounié.  From the other end of the ground, I was a little concerned when Pritchard went down under a challenge from Prödl, but the referee adjudged that the Huddersfield man had played for the penalty and booked him. 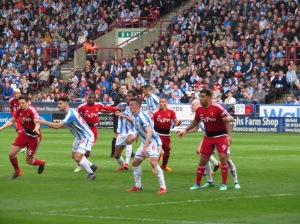 With about 10 minutes remaining, each side made a substitution with Billing on for van La Parra and Deeney making way for Gray.  The home side had a chance to take the lead almost immediately as a defensive header from Prödl reached Hogg, whose shot was just wide of the far post.  At this point, there was an ironic chant of “This is the best trip I’ve ever been on” from the travelling Hornets.  Gracia’s last roll of the dice was to replace Hughes with Sinclair.  But it was the home side who made the breakthrough in time added on with a goal out of nothing.  A ball was launched into the Watford box, Karnezis came across to gather but Zanka pulled the ball back and Ince was on hand to finish into an empty net with Huddersfield’s first on-target shot of the game.  So frustrating.  The Hornets tried to hit back as a shot from Prödl was blocked leading to a Watford corner, but Lössl leapt to gather the delivery and the home side won all three points at the death. 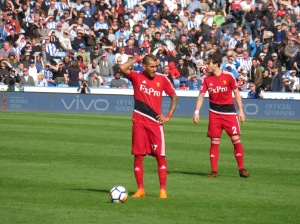 At the final whistle there was a joyous roar from the Huddersfield fans, who had been very loud in support of their team throughout the game.  I was happy for them, but couldn’t help but contrast that with the tears of two young Watford fans who were sitting near me.

It was another very frustrating afternoon for Watford fans.  Our team had certainly been better in the second half, but it was hard to argue that we deserved anything out of the game.  Huddersfield seemed to want it more, even if they did have only the one shot on target.

Sadly we are having yet another season where we finish with a whimper and (hopefully) stay up due to sterling efforts in our early games.  I find myself looking forward to mid-May when it will all be over.  But I can’t help hoping that we still have something more to cheer this season.  Otherwise, the pies had better be cracking over the next month.

1 thought on “At Least the Pies Were Good”