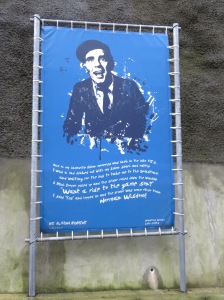 Norman Wisdom welcomes us to the Amex

Our last visit to Brighton was memorable for all the right reasons.  After taking the lead in the first half, the game had been a bit of a slog, before Vydra’s injury time goal sent us all away happy.  It having been the lunchtime game, we retired to a lovely pub and, after spending the preceding couple of hours in the garden anxiously checking phones, we interrupted a quiet afternoon by erupting in joy as last minute goals confirmed our promotion.

It seemed appropriate to return to the scene of the celebrations, although there was no way we could sit in the pub garden on a cold December afternoon.  The beer and food was excellent and the company delightful as we were joined by Kevin Le Belge.  The locals were friendly and helpful, warning us to leave in plenty of time due to the queuing system at the station (which turned out not to be required on this occasion).

After the short train journey to the ground, the walk to the turnstiles was enhanced by the banners recalling memorable Brighton moments.  One which really appealed to me was Norman Wisdom stopping at a bus stop to give a young lad a lift to the game.  The Brighton stewards are among the nicest I have encountered on my travels, so the usual search was done with smiles and the sign inside the ground welcoming us after our journey always engenders goodwill.

Team news was that Silva had made four changes, two enforced by suspension, with Watson, Cleverley, Pereyra and Gray coming in for Mariappa, Capoue, Doucouré and Deeney.  So the starting line-up was Gomes; Janmaat, Prödl, Kabasele, Holebas; Watson, Cleverley; Carrillo, Pereyra, Richarlison; Gray.  It would be interesting to see Watson back in the team, but you had to feel sorry for Mariappa, who has been a stalwart this season.

Holebas debating a corner with the lino as Pereyra looks on

We were hoping for an improvement on last week’s dire performance, but the early signs were not good as a shot across goal from Hemed went begging, but Knockaert picked up the loose ball and his shot had to be saved by Gomes.  Pröpper then tried a shot from the edge of the box, but it was well over the bar.  Brighton threatened again as a cross from March flew across the goal but, on this occasion, Hemed just missed making the connection.  Watford’s first chance came after a quarter of an hour when a corner from Cleverley reached Pereyra on the edge of the box, he volleyed goalwards, but it was well wide of the target.  We waited another 15 minutes for the next action worthy of note when Carrillo tried a shot that appeared to take a deflection and was easily gathered by Ryan in the Brighton goal.  The home side had a decent chance to take the lead from a corner that was delivered to the far post where Goldson had a free header, but Gomes made a great save at close range.  It had been a dull half, but there was a moment of rare quality as Pereyra and Janmaat exchanged some slick passes to make their way out of defence and up the right wing, sadly the resultant cross was caught by the keeper, but the move was just wonderful.  At the other end, Knockaert had a chance to open the scoring, but his shot was straight at Gomes.  The Frenchman threatened again, but this time was thwarted by a great tackle from Richarlison who emerged with the ball.  The Brazilian had a half chance at the other end after a counter-attack, but his shot was weak and easy for the keeper. 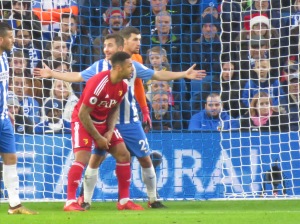 Andre Gray up against Suttner

It had been a dull first half, the most positive thing anyone could find to say about it was that the score remained at 0-0 and there were still eleven Watford players on the pitch.

The first chance of the second half fell to the visitors but the shot from Hemed flew well over the bar.  Goldson then had a chance from a corner, but directed his header wide of the target.  Watford’s best chance of the game so far came as Richarlison played a one-two with Pereyra before unleashing a great shot that stung the palms of Ryan as he kept it out.  At the other end, Groß went close with a shot from the right that flashed across goal and flew just wide of the far post.  The home side should have taken the lead with a great shot that was met by a terrific flying save from Gomes.  The blokes in the row in front arrived back from their half time refreshments just in time to see Groß receive the ball on the edge of the area and unleash a shot that Gomes really should have stopped, but it bounced off him and in to give the home side the lead.  Brighton almost had a second soon after as a corner was met by the head of Dunk whose effort was just wide of the target. 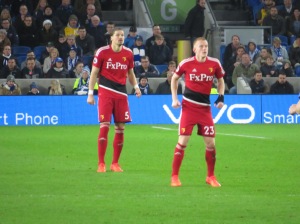 Watson back in the team

Silva made his first substitution with 20 minutes remaining bringing Sinclair back from the wilderness to replace Pereyra.  The home side had a terrific chance to increase their lead as March broke upfield before crossing for Hemed whose close-range shot missed the target.  Silva’s second change saw Capoue come on for Watson, who had had a disappointing return to the team.  Watford had a decent chance for an equalizer from a Cleverley free kick which Kabasele met, but headed just over the target.  Silva’s last substitution saw Okaka come on for Gray.  The rapturous reception given to the Italian told you all that you needed to know about the afternoon’s performance.  The substitute almost made an immediate impact, breaking through on goal, but his shot was blocked.  There was an even better chance for the Hornets as Holebas crossed for Richarlison whose header was just wide of the target.  Hughton made his first change bringing Kayal on for the goalscorer, Groß.  The home side threatened to kill the game off with a quick break from Hemed whose shot was blocked, the ball fell to Knockaert but he could only hit the side netting.  Brighton made a couple of late substitutions as Hemed and March made way for Murray and Izquierdo.  Okaka had a couple of late chances to snatch a point for the Hornets, first he met a cross with a header, but it was weak and drifted wide.  Then, with the last action of the match, Ryan fumbled a cross from Carrillo, the ball dropped to Okaka at the far post, hit his knee and bounced wide.  He was looking straight at us as we clutched our heads in despair and, it has to be said, looked pretty devastated himself.

Since the last action was at the end of the ground that was housing the Watford fans, we were treated to the unpalatable spectacle of Knockaert celebrating with glee right in front of us.  Even more distasteful was the chorus of boos from the travelling fans as Silva applauded us at the end of the game.  I despair of football fans, while not being surprised, as some had started their complaints in the first minute.

It is a funny old game football.  We finish the first half of the season with 22 points siting pretty in tenth place in the table.  If you had told me that at the start of the season, I would have been delighted.  But, following the highs of the early games when I thought we could beat anybody (except Man City), the recent run of 4 defeats, means that the cushion that we had has all but disappeared and there are fears of an upcoming battle against relegation.  Our team selections have been disrupted by injuries and ill-discipline and I still believe that, with a full squad to pick from, we could establish ourselves in mid-table, although that faith is being sorely tested at the moment.  Still, the friendship of the group that I travel with and the regular encounters with so many other lovely Watford fans mean that every match day has its pleasures, even if the game isn’t up to much.

To all of you who read this blog, thank you for your support.  I wish you all a very happy Christmas and three very welcome points on Boxing Day.

1 thought on “No Respite on the South Coast”