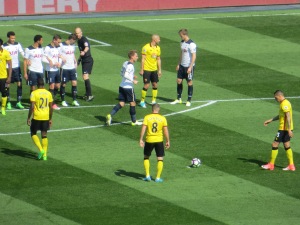 Cleverley and Holebas line up a free kick

The lunchtime kick-off meant an earlier than usual departure for a London game.  I had arranged to meet my niece at Euston and decided to get an earlier train to give me time for a leisurely breakfast at Café Rouge (and very good it was too).  When Amelia arrived, we got the tube to Seven Sisters before taking a walk in the sunshine up Tottenham High Road to the stadium.  As we arrived at the security cordon outside the ground, there was a woman in front of us with a couple of children who had “Daddy 6” on the back of their shirts.  How lovely to see Mariappa’s young family back in Watford kit.

Team news was that Mazzarri had made four changes (two forced, two tactical) with Mariappa, Janmaat, Success and Okaka in for Britos, Prödl, Capoue and Deeney.  So the starting line-up was Gomes; Mariappa, Cathcart, Holebas; Janmaat, Cleverley, Doucouré, Amrabat; Niang, Okaka and Success.  An interesting formation and a little surprising to see Deeney dropped to the bench. 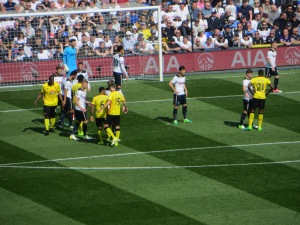 Gathering for a ball into the Spurs box

The game started very well for the Hornets as Holebas won an early free kick.  He took it himself and curled a lovely shot towards the far corner, but it ended up in the arms of Lloris.  Soon after, Holebas played a corner short to Doucouré before running into the box to receive a return ball, but it ran through and was gathered by the Spurs keeper.  For the home side, Son had a decent chance from a tight angle, but the ball was deflected onto the post and out for a corner.  Watford challenged again as a cross from Doucouré was punched clear by Lloris as Okaka challenged.  The hosts should have taken the lead as Janssen turned in the box and shot, but Gomes saved with his feet.  At the other end, Holebas played a free kick to the far post where Cathcart prodded it into the side netting.  Hoping to repeat his goal from midweek, Niang tried a shot from distance, but this time it was straight at Lloris.  Spurs had a great chance to take the lead in the 18th minute as a cross from Trippier reached Janssen in front of an open goal, but he could only divert the ball onto the crossbar.  Another cross from Trippier soon after went begging as Janssen was unable to connect.  At the other end, a smart exchange of passes ended with the ball reaching Success who snatched at his shot which flew the width of the field and out for a throw-in!  The home side took the lead in the 32nd minute and it was a brilliant goal, a lovely curling shot from Dele that nestled in the top corner of the Watford net. 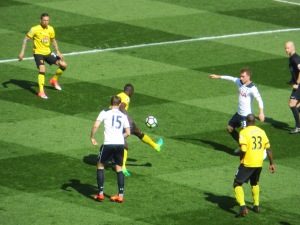 Niang on the ball

The visitors were appealing for a penalty soon after when Success went down in the box, but the appeals were waved away.  The Hornets were two goals down after 39 minutes when a shot from Son deflected off Doucouré and fell to Dier who smashed it past Gomes.  After the terrific start from the Hornets, they really didn’t deserve to be two goals down at this stage.  But it got worse before half time as Son hit a lovely shot from distance for the third goal.  That was just nasty.

If you were only to look at the half time score, this looked like a pasting, but Watford had played some really lovely football in the first half.  However, Spurs are easily the best team that I have seen this season and their moments of quality in front of goal were the difference between the teams.

It could have been much worse early in the second half as, from a Watford corner, Eriksen intercepted the ball and went haring the length of the pitch and was only stopped by a terrific tackle from Janmaat in the box.  Watford’s Dutchman then had a chance himself at the other end, dribbling along the top of the box before shooting just wide of the target. 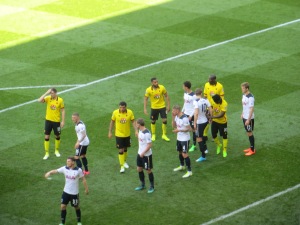 Spurs scored their fourth ten minutes into the second half, the Watford defence should have done better with this one as Trippier crossed for Son who was in an acre of space as he finished for his second goal of the game.  Mazzarri’s first change was to bring Zuñiga on in place of Doucouré.  This substitution wasn’t as protracted as usual, probably because, I am reliably informed, Zuñiga waved Frustalupi away as he produced his tactic book.  Despite the scoreline, Watford were not giving up and Okaka broke into the box and cut the ball back for Niang who was muscled off the ball.  On the hour, Spurs brought Kane on for Janssen, which seemed rather cruel from my perspective.  Watford should have done better when Okaka played a lovely through ball to Success, but the Nigerian hit his shot into the ground and it flew wide.  Watford’s second substitution was an attacking change as Deeney came on for Amrabat, who had played through the middle all afternoon.  As the Watford crowd were singing for GT, the Hornets won a corner, which came out to Deeney who had a great chance to reduce the deficit, but shot well over the bar.  On 80 minutes, the away fans were indulging in shouts of Olé as the players passed the ball around beautifully, but one misplaced pass and Dele escaped towards the Watford box, the ball found its way to Son, who looked nailed on for his hat trick, but managed to shoot wide of the near post.  The South Korean had another great chance to go home with the match ball, but this time whipped his shot onto the crossbar and over. 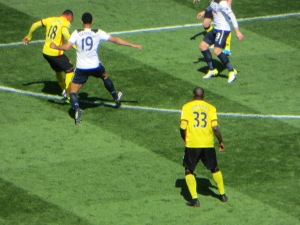 Mazzari’s final substitution was a case of shutting the stable door some considerable time after the horse had bolted, as he replaced Okaka with Kabasele.  Spurs had one final chance of a fifth goal as they won a free kick in the final minute of added time, but Kane wasted the last kick of the game directing the ball on to the crossbar.

4-0 was a rather cruel scoreline for the Hornets, but Spurs had been excellent.  Having scored three in the first half, the home side appeared to relax a bit in the second period, which was nothing like as entertaining as the first 45 minutes.  But fair play to the Watford players for still giving it a go.  Fair play also to the travelling fans, as they were singing all afternoon and then applauded the players off the pitch.  That support was rewarded with a nice little gesture as Success reappeared after the cameras had departed to hand out a couple of shirts, one of which was held aloft by Don Fraser as he left the ground.  That made me very happy.

As we left the ground in search of the brewery tap who had sent a message to Dave M suggesting that Watford fans would be welcomed after the game, we found the locals very pleasant (quite understandably) but also the stewards on the way, a number of whom helpfully gave us directions for the supporters coach which was parked quite a distance from the ground and very close to the bar.  The location for the brewery wasn’t the most attractive that I have ever seen, being a unit on an industrial estate, but the welcome was warm, the beer was very pleasant, the sun was shining and the company was second to none.  As we eventually left to make our way to our evening commitments, we were all in a very good mood.  This wasn’t a game that we expected to win and, despite the scoreline, the Watford performance had certainly not been as cowed as in the game at Liverpool.  The patched together defence had done a decent job in the first half hour and most of the Spurs goals had been down to individual brilliance from the players in question.  We ended the afternoon with our team in the top half of the table, amongst good friends with the sun shining.  So, despite the defeat, all felt right with the world.

1 thought on “No Shame in a Harsh Defeat”