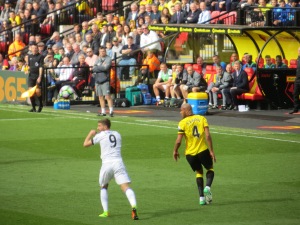 Despite the poor showings on the pitch in recent games, a week off for the international break meant that I travelled to Watford with renewed enthusiasm for seeing a match.  When I arrived at the West Herts, the external door was open, so the early arrivals had piled into the lobby waiting for the inner door to open, which was baffling as it was an absolutely gorgeous day, so I loitered in the sunshine for a little longer.  This meant that I saw a couple of roadie friends who wished me a very enjoyable pre-match as the pleasure from what would follow could not be guaranteed.

My low confidence regarding the game had not been helped by the news that there were fitness doubts over Deeney and Prödl and, sure enough, Mazzarri made four changes with Holebas, Doucouré, Amrabat and Okaka replacing Prödl, Janmaat, Behrami and Deeney.   So the starting line-up was Gomes; Cathcart, Kaboul, Britos, Holebas; Doucouré, Cleverley, Capoue; Amrabat, Okaka and Niang. 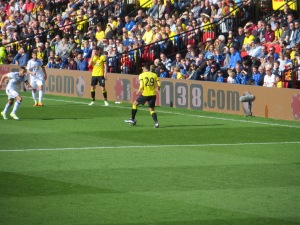 Capoue on the ball

It was certainly good to see Amrabat back in the starting XI and he made an immediate impact with a dangerous cross towards Niang that was headed out for a corner.  As the sun shone at Vicarage Road, I couldn’t help but note that Sunderland’s away kit had a touch of Real Madrid about it, which would have appealed to Kate who, on a visit from Saudi, was back in her seat in the Rookery.  Gomes was forced to make the first save of the game as he pushed a shot from Januzaj around the post for a corner.  Watford had a couple of great chances after Capoue broke forward and found Niang by way of Doucouré, the shot was parried by Pickford, the ball returned to Doucouré and Pickford had to pull off another smart save to keep the game goalless.  Okaka was the next to threaten the Sunderland goal, going on a lovely jinking run beating a couple of defenders before shooting, but Pickford was down to block the shot.  Doucouré had the next chance as a corner was headed out to him, but his shot from distance flew wide.  Okaka should have done better when he met a cross from Capoue, but his header flew over the bar.  Just before the half hour, Niang went on a wonderful forward run but, after doing all the hard work his shot was straight at a defender.  As the play returned to the other end of the pitch, he just ambled around.  I wondered whether he had an injury, but it soon became clear that he just needed a sit down after his exertions. 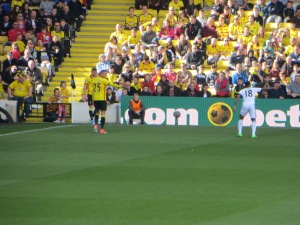 Holebas and Cleverley prepare for a corner

A lovely passing move from the Hornets ended with Capoue exchanging passes with Okaka before curling a shot just wide of the far post.  Late in the half, there was a break in the game to allow Kaboul to be treated for an injury after he stretched and appeared to pull his hamstring.  The players gathered on the touchline for refreshments and words of encouragement, most of which seemed to be coming from Troy Deeney.  Unfortunately Kaboul was unable to continue so was replaced by Janmaat who came on to a chorus of boos from the Sunderland fans.  Sunderland had a rare chance with a Januzaj shot that took a deflection for a corner which led to a break by Amrabat who played a lovely cross field ball to Niang whose shot was pushed wide by Pickford.  Cleverley’s corner was headed goalwards by Cathcart, but Pickford again made the save.  As the clock reached 45 minutes, there was a half chance for the visitors after Okaka failed to clear allowing the ball to fall to Koné, thankfully his shot was wide of the far post.  The final chance of the half fell to the home side with a shot from Britos that was straight at Pickford. 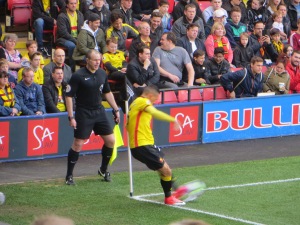 The half time whistle went and, for the first time in a while, I felt throroughly entertained.  The Hornets had put in an attacking performance and were unlucky not to be ahead, although a lot of that had to do with the very impressive Jordan Pickford in the Sunderland goal.  During the interval, I caught up with Saudi Kate who expressed surprise at the level of impatience in the crowd around her during what was a decent performance from the Hornets.  It was also gratifying to see a report on the big screen featuring Stacey and Troy Deeney talking about their new charitable foundation’s project at Garston Manor School.  So lovely to see them making a difference in the local community.

At the start of the second half, Success was running down the touchline and the guy next to me commented that he was starting his 20 minute warm-up.  The visitors’ hearts must have sank as Defoe went down needing treatment.  It felt disloyal, but I was actually pleased when he got to his feet and was fit to continue.  The first chance of the second half fell to the Hornets but Niang’s cross flew just wide of the far post.  Success made an appearance rather earlier than usual as he came on after 53 minutes to replace Amrabat, who looked disappointed to be substituted.  You can only think that Mazzarri was saving him for Tuesday. 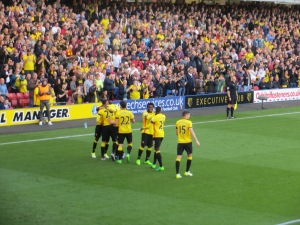 Watford’s next chance fell to Holebas who cut inside and shot wide.  His reaction was typical Holebas, he looked furious at someone, but who??  A Cleverley corner was punched only as far as Success, whose shot was deflected wide.  Watford took the lead from the subsequent corner as Okaka’s header was deflected on to the crossbar, Cathcart headed the ball towards the far post where Britos rose above the defence to head home, finally beating Pickford.  My only thought as the game restarted was, please don’t defend for 30 minutes.  Watford should have increased their lead soon after as Okaka played a lovely through ball to Success who looked certain to score, but Pickford saved with his feet.  The ball found its way to Doucouré but his shot was also blocked.  The visitors had a rare chance when Borini tried a shot from the edge of the area, but Gomes was equal to it.  They had a better chance soon after when Ndong cut the ball back to Januzaj but his shock was weak and straight at the Watford keeper.  Holebas had a wonderful chance to increase the lead with a lovely shot that just took a deflection and cleared the crossbar.  Having heard boos from the away end for a former Newcastle player, it was a bit surprising when their own player, Januzaj, left the field to even louder boos when he was replaced by Khazri. 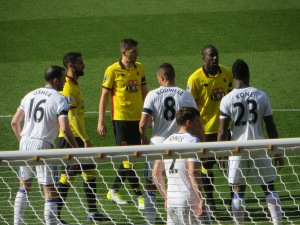 Britos, Cathcart and Okaka gathering for a corner

The first booking of the game went to Jones for hauling Success back when he was about to escape.  The Nigerian had the next chance of the game, holding off Jones to make space for the shot, but it was a disappointing effort, straight at Pickford.  Watford were almost made to regret not making the most of their chances as Borini hit a shot from the edge of the area but Gomes made a decent save to preserve the lead.  Mazzarri’s final change was to bring Zuñiga on for Niang, who had a decent game although his end product was disappointing.  I must admit that I was disappointed that Deeney wasn’t given a few minutes to extend his uninterrupted run of games.  Okaka had a chance to make the points safe as he met a cross from Janmaat with a header but, yet again, Pickford made the save.  In the last minute of added time, Cleverley fouled Khazri in a dangerous position, and I’m sure every Watford fan was holding their breath as the Sunderland man prepared for the free kick.  I think I celebrated as if we’d scored when the shot hit the wall and the final whistle was blown to confirm a precious, and very well deserved, three points for the Hornets. 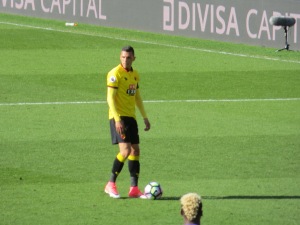 Holebas lining up a free kick

As the players did their lap of honour, Cleverley and Cathcart were walking together and the Rookery sang Tom’s name in acknowledgement of his new contract.  I couldn’t help feeling sad that Cathcart, who has been consistently good, does not have a song, so his contribution appears to be unappreciated by the crowd.  It really isn’t.  The last player to pass the Rookery was Gomes, who was in super-animated mode which elicited a positive reaction from the crowd.  You just have to love him.

On the way out of the ground I heard someone say, “I think I’ll watch Match of the Day tonight,” which summed the last few week up perfectly.  It was a much better performance than of late.  Many players who have been substandard in recent games put in a much improved showing.  Of note was Capoue, who has attracted ire from many in my group, who had his best game in ages.  Niang was impressive, if disappointing in front of goal.  Doucouré put in a very good performance, Okaka led the line well and it was great to see Amrabat back, he certainly adds something.

So I will go into Tuesday’s game against West Brom in a much better frame of mind.  Another win or two and we can relax and look forward to taking up our recently renewed season ticket seats for another year of Premier League football.

1 thought on “Back to Winning Ways”