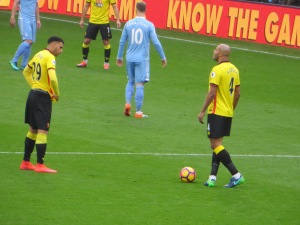 Kaboul and Capoue line up a free kick

Midday on a Sunday is a ridiculous time for a football match.  I was up at the crack of dawn (for me) in order to get to the game but a slight delay on my first train meant that I had to wait a while for the connection at Euston so that, when I arrived in the West Herts after a long journey, the pleasant greeting from my friends was “Where have you been?”  Still, my tardy arrival did mean that a round was already in progress and the traditional cider went down very well with the bacon roll (apple juice is a breakfast drink, isn’t it?) setting me up for the afternoon.

Team news was that Mazzarri made one change from last week with Holebas returning from suspension to replace Zúñiga.  So the starting line-up was Gomes; Kaboul, Prödl, Britos; Janmaat, Capoue, Behrami, Holebas; Amrabat, Deeney and Pereyra.  It was good to see each of the captains wearing a rainbow armband in support of the Rainbow Laces campaign which supports fans and players from the LGBT community.  It was also pleasing to see Mazzarri with the rainbow lace displayed on his jacket. 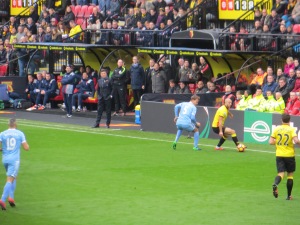 Amrabat on the ball

Any hope that we would start the game in a similar way to the previous week was soon extinguished and Stoke had the first chance, capitalizing on a Watford mistake, as a failure to clear the ball allowed Martins Indi to shoot, but his point blank effort was blocked by Gomes, who was also on hand to gather the follow-up cross.  The home side’s first goal attempt came as Janmaat intercepted a pass and went on a run before unleashing a shot that was saved by (Hemel boy) Lee Grant.  Stoke should have done better when a cross from Diouf flew across the goal but, luckily for the Hornets, there was no Stoke player anywhere near to apply the final touch.  The visitors threatened again with a shot from distance from Imbula that flew just past the far post.  A lovely passing move from the Watford team finished with Amrabat finding Capoue in space, but his shot was straight at Grant in the Stoke goal.  Mazzarri was forced to make his first substitution after 20 minutes as an injury to Kaboul meant that he was unable to continue, so was replaced by Kabasele.  Pereyra created a chance for himself as he picked the ball up on the edge of the area, turned and shot.  It was a similar strike to the one against Leicester, but this time the ball flew just wide.  Stoke were back in the Watford box as Arnautović headed the ball on to Walters who seemed a little surprised to see it come his way and Gomes was on hand to snuff out the danger. 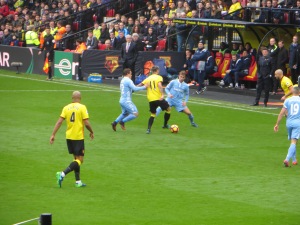 At this stage of the game, the home fans were becoming increasingly impatient with the referee who seemed to be blowing up after every tackle by a man in a yellow shirt.  Half an hour into the game, he had booked both Amrabat and Britos for reasons that were not apparent from the stand and seemed to baffle the players but were put down to dissent.  The visitors took the lead with a scrappy goal as, following a corner, a header from Adam bounced back off the post before rebounding into the net off Gomes.  The Watford faithful greeted this with a chant of 1-0 to the referee which, at the time, seemed to be stretching the truth somewhat as Stoke had been the better team to that point, but I hadn’t seen the foul by Adam before he reached the ball.  The referee certainly didn’t placate the crowd when he blew up immediately after the restart, insisting that the kick-off be retaken.  Watford had a decent chance for an equalizer as a Capoue free kick was met by Britos, but his header cleared the bar.  Holebas was the next to receive a caution, again for dissent as he kicked the ball away having been angered at being penalized when he conceded a corner while being fouled.  In time added on at the end of the half it appeared that Holebas was tripped in the box, but the referee gave the decision the other way.  The whistle for the end of the first half was greeted by loud boos directed at the referee, but it was difficult to put Watford’s woes at his door.  Stoke were playing a very disciplined, organized game and were ensuring that the Watford players had no space to play in.  Instead of finding a way to counteract this tactic, the home side were just getting increasingly frustrated, it was not good to watch. 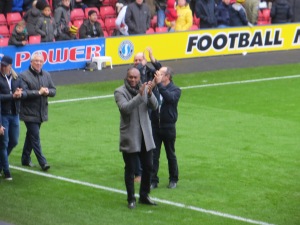 There was a pleasant distraction at half time as the club celebrated Former Players’ Day by reminiscing with Marcus Gayle, Gavin Mahon, Wayne Andrews and Ian Richardson, all of whom evoked happy memories, although I am probably the only person who sees Marcus Gayle and thinks “Wonder Woman”.  They were followed by Keith Mercer, Ian Bolton and Neil Price who were advertising the upcoming dinner at the club and talking about the work of the Former Players Association.  I must say that seeing those old heroes cheered me up considerably.

The visitors started the second half brightly with a run from Arnautović that finished with a cross-cum-shot that was too far in front of the oncoming Walters for him to provide the finishing touch, so flew past the far post.  The Austrian threatened again, but his next shot was stopped by a good block from Kabasele.  Ten minutes into the half, Mazzarri was forced into a second substitution as Holebas, who had received some treatment on the sidelines, was replaced by Ighalo.  The Nigerian’s first half chance came as Amrabat delivered a decent cross into the box, but a defender was on hand to shepherd the ball out and ensure that Ighalo didn’t get a touch.  He had a better chance soon after as he headed a Britos cross goalwards, but the header had no power and was easy for Grant to deal with. 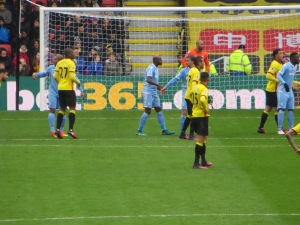 Waiting for a free kick

The home side were having much more of the play in the second half and another ball into the box looked promising as Janmaat’s cross was headed on by Ighalo but it didn’t reach Deeney and the chance was lost.  Mazzarri’s final change saw Okaka brought on to replace Amrabat.  There was a great chance for an equalizer as a cross from Pereyra was cleared to Janmaat on the edge of the box, but his volley was well over the bar when he should have hit the target.  The presence of Okaka did seem to unsettle the Stoke defence and he had a chance to bring the Hornets level as an overhead kick from Ighalo fell to him, but he was at an acute angle to the goal and could only hit the side netting.  Deeney had a great chance to get his 100th goal when he met a ball from Janmaat with a header but it flew over the target.  Watford’s miserable afternoon continued when Britos stupidly fouled Shaqiri and was shown a second yellow card, so we finished the game with ten men.  Stoke then had a chance to increase their lead as Pieters tried a shot from distance which, thankfully, just missed the target.  But there was still time for another booking for Watford as Behrami received his fifth yellow card of the season. 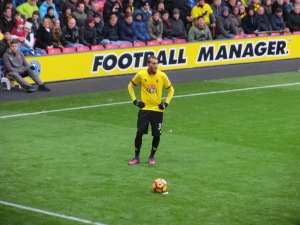 The final whistle was greeted with yet more boos for the referee.  The Watford players, with the exception of Deeney and Gomes, disappeared in an instant providing no distraction for the home crowd as they directed their anger at the official.  Despite the feeling that the goal should have been disallowed for the foul by Adam, I didn’t feel that the defeat was down to the referee’s decisions.  It had been a poor day at the office for many of the Watford players.  There had been an improvement in the second half with the Hornets finding a bit more space, but the win was a result of Stoke effectively stopping their opponents from keeping the ball or creating any chances.  But the most disappointing aspect of the game was the petulance and ill-discipline of many of the Watford players, which resulted in yellow cards and a sending off that will mean that both Britos and Behrami are unavailable for the game against West Brom.  Sunday’s game was as bad as the previous week’s was good, but that is what we should be expecting this season and, to put a positive spin on it, this is becoming a season in which (ouside the top six) any team can beat any other and, while that will lead to games like Saturday’s, it also means that we can approach most games with an expectation that we can get something out of it and that has not been the case for us at this level since the 80s.

2 thoughts on “Petulant Loss to the Potters”