The oatcake and beer barges

I have just returned from a business trip, the original plans for which would have meant missing this game and, to be honest, if I had to miss a game then a trip to Stoke wasn’t one I would be too upset about.  As it turned out, I missed the Arsenal game instead, or rather I spent the morning sitting in a pub in San Francisco watching it.  I was so proud of our performance for the first hour, especially the fact that we went for it rather than the cautious approach that we took against Man City.  The three goals were a little hard to take, but our season won’t be decided by the results of games against the likes of Arsenal.  The game against Stoke was a different matter completely.  It would be a real test, with the result giving an indication of what we can expect for the rest of the season.

My previous trips to Stoke have been on the supporters’ coach, so I’ve always had the impression that the ground is miles out of town and a pig to get to.  Also, away fans are advised to avoid most of the pubs.  So, as I left home feeling fatigued after my travels, I did not have high hopes for my day out.  However, on arrival at the designated pub, which had a sign in the window indicating that only Stoke fans were welcome, the door was held open for me by the security guy, which is always a good sign.  Our advance party was already in place at a table, the beer was good and the food was hearty.  As the pub filled up, there seemed to be more faces that I recognized than not, so the sign in the window was not acting as any kind of deterrent.  The next adventure was to walk to the ground.  It turned out to be an easy stroll along the canal towpath which was not the most picturesque I have ever encountered, but certainly had lots to remark upon.  There was a group of ropey looking canal boats, one of which had foliage on the rudder suggesting a lack of custom.  They were just outside a ‘shooting range’ that appeared to be someone’s garden shed.  Then, as we arrived at the bridge to the ground, there were a couple of somewhat nicer looking barges which were serving oatcakes and beer and doing a roaring trade from the punters who had made the ‘long’ trek from town.

Team news was just the one change with Britos making his league debut in place of Prödl, a selection that raised eyebrows, especially from those who had witnessed his truncated performance at Deepdale.  The starting line-up was Gomes, Aké, Britos, Cathcart, Nyom, Watson, Capoue, Anya, Deeney, Abdi and Ighalo.  Stoke came into the game in good form having won their previous three league games while only conceding a single goal.  Given Watford’s lack of goalpower, this record was a little worrying.  But we started well as Deeney got goalside of Cameron only for Johnson to appear to take the ball off his feet and redirect it towards Butland.  The home side’s first chance fell to Charlie Adam whose shot from the edge of the area flew wide of the near post.  Then Anya cut the ball back to Watson whose shot was blocked.  Stoke were forced into an early substitution as defender, Cameron, was replaced by Wilson due to an injury sustained in his early challenge with Deeney.  A cross into the Watford box was well blocked by Capoue, it came back in and Aké headed clear but only as far as Adam whose shot was deflected for a corner.  Abdi exchanged passes with Aké before finding Anya whose attempted cross was blocked so looped unthreateningly into the area before it was cleared.  Stoke had a great chance to take the lead just before the half hour as a dangerous cross from Shaqiri was headed wide by Arnautovic when he really should have done better. 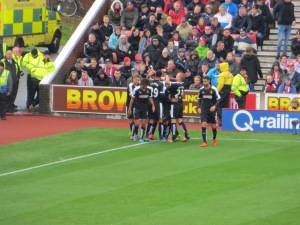 Watford had been dreadful for most of the half, they looked sluggish and passes were going horribly astray.  But, just as I was thinking I should have stayed at home and slept off the jet-lag, we had a great chance to take the lead.  Anya broke forward and crossed for Ighalo.  I was already celebrating when the Nigerian’s header came back off the crossbar, but the chance had not gone.  Odion’s follow-up shot was blocked and rebounded to Abdi, the ball got stuck under his feet so he moved it on to Deeney who was in space but his shot hit the same spot on the crossbar that Ighalo had found and rebounded to safety.  At the other end a Stoke break was stopped as a cross from Johnson was blocked by the brilliant Watson.  From the corner, Shaqiri’s delivery appeared to be flying in but Gomes punched it clear.  Surprisingly, it was the visitors who took the lead just before half time.  A lovely back heel from Ighalo found Deeney who got into position and curled the ball into the corner past Butland.  The celebrations in the away end had extra impetus due to Deeney finally having scored his first goal of the season.  He has worked his socks off and thoroughly deserved it.  Most of the first half had been dreadful, but the goal ensured that the Hornets left the pitch to applause and with Troy Deeney’s name ringing out in the Britannia.

Deeney congratulating Abdi after he scored the second

Watford launched the first attack of the second half as a long free kick from Gomes reached Deeney whose header was soft and straight at Butland.  At the other end, Shaqiri hit a shot from outside the area that flew high and wide.  Deeney had a great chance for a second as Ighalo found him in space.  Last season he would have buried the ball, but this time he took one touch too many and the chance was gone.  Watford had a shout for a penalty as Ighalo tumbled in the box, but the referee waved appeals away, which was fine by me as it would have been rather soft.  A corner from Watson reached Ighalo in the centre of the box, he volleyed goalwards, but there was a body in the way to block the shot which was hit with such power that I would suspect that body was hurting for some time.  Watford were on top now and a Cathcart free kick was nodded down by Deeney towards Ighalo who was held off by a defender so couldn’t reach the ball.  Flores made his first substitution on 64 minutes replacing Anya with Paredes.  Watford’s second goal came on 69 minutes as Ighalo battled to dispossess Wilson on the left and played a perfect pass into the path of Abdi who advanced and hit a gorgeous shot past Butland at the near post.  The celebrations in the away end were joy unconfined. 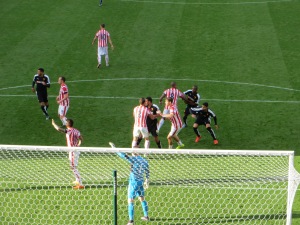 Watford were looking to increase their lead further as Paredes advanced down the right, his cross reached Abdi who balooned his shot wide.  Paredes then had a chance himself as he hit a powerful shot from outside the area that Butland dived to keep out, although the block was such that the ball could have flown anywhere.  A Stoke counter-attack finished with Walters shooting well wide of the far post.  The first booking of the game went to Whelan for taking Capoue down in the centre circle.  Watford’s second substitution saw Behrami replacing goalscorer, Abdi, who went off to warm applause and the sound of his name being chanted.  Another Stoke chance was scuppered as the attentions of Deeney ensured that Adams shot high and wide.  At the other end, Deeney played a ball to Capoue whose shot curled just wide of the target.  Stoke’s late attempts to cut the deficit were poor as, first, a Johnson cross was headed wide by Arnautovic and then a corner flew across goal and straight out for a goal kick.  A late substitution by the visitors saw Guedioura coming on for Igahlo.  The Nigerian took a while to leave the pitch so was pushed by Pieters, there was a bit of handbags and both men received a caution.  Stoke’s frustration manifested again as Adam hacked Capoue down and was carded for the offence.  As the fourth official signalled four minutes of time added on, the home stands were almost empty.  The final chance of the game fell to Capoue whose low free kick was disappointing and flew well wide of the goal.

Just after the post-match hug

There were great celebrations in the away end after the final whistle and it was lovely to see Flores, Deeney and Gomes return from thanking the referee with their arms around each other.  As the last Watford player left the pitch the travelling Hornets were still bouncing and singing and my earlier jet-lagged state had been replaced with euphoria.  If we had been fortunate in the first half, we had been excellent in the second and thoroughly deserved the win.  While the goals for Deeney and Abdi and Ighalo’s two assists will attract the headlines, the consensus among our party was that the man of the match award should go to Watson, who was quietly magnificent running the midfield, with a special mention for Capoue who had the home side rattled throughout.

So 10 games played, 13 points and 13th in the table.  We’d have taken that in August.  We’ve also broken our Premier League duck for October.  It is always good to see records like that falling.

As I was waiting for the train home, I was joined on the platform by Stuart Timperley and Miles Jacobson, fresh from the Stoke boardroom, so had a very interesting journey home with these two delightful gentlemen.  A wonderful end to an unexpectedly enjoyable day in Stoke.

2 thoughts on “Stoked in the Potteries”