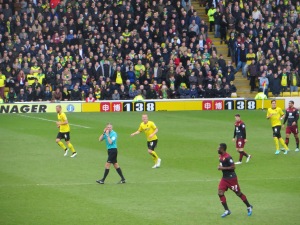 Ben Watson has his eye on the ball

This fixture was always going to struggle to live up to the excitement of the last few games.  Norwich certainly promised to be tricky opponents having been in decent form since Alex Neil took over.  Team news was that Deeney was restored to the starting line-up which was Gomes, Angella, Ekstrand, Cathcart, Anya, Abdi, Watson, Layun, Paredes, Ighalo and Deeney.  Former loanee, Sebastien Bassong, started for the visitors.

It all started rather brightly as Watford fashioned a chance in the second minute but Deeney headed Layun’s cross over the bar.  The first goal attempt for Norwich came from a controversial free kick that was taken short to Whittaker whose shot was high and wide.  Ighalo did really well to retain the ball under pressure from the defenders, played it out to Paredes whose cross was disappointingly hit straight to the Norwich keeper, Ruddy. 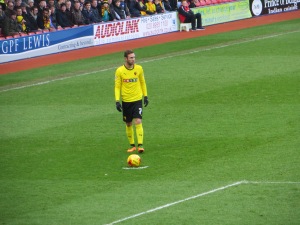 Layun lines up a free kick

Ighalo won the ball from Bassong in the midfield and played it to Deeney whose shot from an acute angle went wide of the far post.  On 35 minutes, Abdi was hacked down by Tettey on the edge of the box.  The Norwich players surrounded the referee protesting ridiculously at a cynical foul ensuring that Johnson joined Tettey in the referee’s book.  The free-kick was in perfect position for Abdi, but his shot was deflected off a Norwich head and clear.  The half-time whistle went after a total non-event of a half.  Watford had had the better of the possession but Norwich, using fair means and foul, had done a very good job of disrupting our play so there had been little in the way of goalmouth action.  The fact that I had managed barely half a page of notes during the half tells its own story.

Watford also had the first goal attempt of the second half as a cross from Anya was headed clear.  The corner was disappointing with Layun’s set piece going straight to Ruddy.  Deeney did really well to keep the ball under pressure, he played it in to Ighalo in the box, but the ball was taken off his feet by a Norwich defender before he could shoot.  A break by Johnson was stopped by Cathcart who was booked for the foul.  Tettey shrugged off a challenge from Ighalo, knocking the Nigerian to the ground as he ran into the box, before wellying his shot over the bar.  On the hour, a cross from Anya was blocked, the ball fell to Abdi but he was off balance as he shot and it was an easy catch for Ruddy.  The game changed in the 64th minute as Hoolahan broke into the Watford box and executed a dramatic dive.  It was clear from our vantage point that he was play-acting, but the referee was behind him and pointed to the spot.  Grabban stepped up and hit the penalty to Gomes’s left.  The keeper went the right way but couldn’t reach the ball which nestled in the bottom corner. 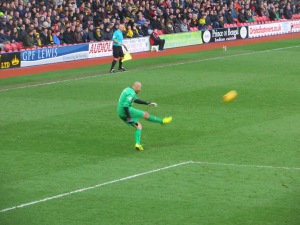 The referee continued to endear himself to the Watford fans as, following a nasty foul by Howson on Abdi, the yellow card was shown to Ben Watson.  I have no idea what he had done, but most likely he had critiqued the referee’s performance.  Jokanovic made his first substitution at this point bringing Munari on for Layun.  The visitors were two goals to the good soon after as Johnson played the ball to Jerome who chipped over Gomes and into the net.  Watford’s second substitution saw Vydra on for Ekstrand.  Watford’s goal was threatened again as Cathcart passed a clearance straight to Grabban whose shot had to be turned around the post by Gomes.  Watford’s final substitution came on 77 minutes as Tözsér replaced Watson.  Watford had a chance to hit back as Vydra received a pass from Ighalo in a decent position to try a shot but he elected to pass to Deeney instead and the ball was cut out.  Norwich had a great opportunity to further increase their lead as a Redmond free kick was met with a smart header from Johnson, but Gomes pulled off a great save as he dived and got a hand to the ball to keep it out.  Norwich scored their third with the next move as Cathcart failed to cut out a cross from Whittaker which reached Grabban, who turned it past Gomes.  Grabban could have had his hat trick soon after as he broke forward but his shot from an angle flew just over the bar.  The last chance of the game fell to Watford, a cross from Anya was headed away from goal by Deeney, it fell to Tözsér who shot wide of the target.

There were no boos at the final whistle, mainly because those who indulge in such behaviour had set off for home some time beforehand.  After some terrific performances in the last few weeks, it is difficult to be critical.  The penalty that shouldn’t have been was definitely a turning point, but it was disappointing that we capitulated rather than fighting back as we did at Bolton and Brentford.  Norwich came to disrupt our play and we allowed them to do so a little too easily.  The scoreline flattered the visitors, but we barely had a shot on goal so didn’t deserve anything from the game.  Thankfully, we have another home match on Tuesday in which to get this out of our system.

As there was so little to say about the game, there is time and space to mention a couple of off pitch incidents.  I am reliably informed that there was a fight between Watford fans in the SEJ stand.  Stewards involved and everything.  What is the World coming to?  I was also surprised to hear that Beppe Sannino was at the game.  He told Don afterwards that he was “Sorry Watford lost,” but that we would soon be a Premier League team.  At least Don thought he meant us, not Norwich!  It is good to see that there are no hard feelings there anyway.