The players are joined by servicemen for the minute’s silence

When I arrived at Liverpool Street at 10:30, I didn’t bother to text my travelling companions, just headed for the pub and, sure enough, there was Jac (with a pint of Stella) I turned around to find Toddy walking in, so we were soon sitting comfortably with a tasty breakfast (IPA).  If we started early, the Norfolk ‘Orns had started earlier and with some gusto, so were a very merry group on their arrival.  So much so that one of them was requested to pop over to the burger van for a cup of tea before he was allowed entrance at Portman Road.

For the second game running, Jokanovic had made 5 changes, although there were fewer complaints this time as the only change from the win against Millwall was Forestieri in for Ighalo.  So the starting line-up was Gomes, Pudil, Ekstrand, Bassong, Paredes, Andrews, Munari, Tözsér, Forestieri, Deeney, Vydra. 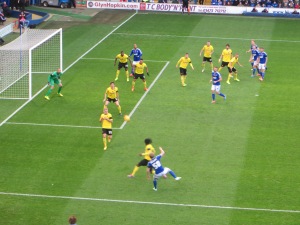 A cross from Williams is cleared

The home side had an early corner that was cleared by Bassong.  Then a rebound fell perfectly for Forestieri who advanced into the box but was tackled before he could shoot.  Watford should have taken the lead after ten minutes when Vydra played a ball across to Forestieri, his pass found Munari in the box who had only the keeper to beat but hit his shot straight at Bialkowski.  Ipswich then had a wonderful chance of their own with a side foot volley from Murphy that was tipped over by Gomes.  The next goal attempt also fell to Murphy, but this one was a soft shot that was straight at Gomes.  At the other end Vydra fed Forestieri but again his shot was blocked.  The first card of the game came after half an hour when Paredes was booked for a foul on Williams, which was a bit frustrating as the referee had let a lot of fouls against Watford players go.  Watford had another half chance as Vydra received a ball from Andrews on the right, he cut it back to Pudil whose shot deflected off a defender into the keeper’s arms.  Then Paredes crossed for Deeney who had to control the ball before hitting his shot, which was blocked. 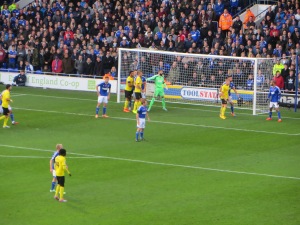 The first, and only, card for Ipswich came when McGoldrick stopped Watford taking a quick free-kick.  Just before half time, McGoldrick was penalized for a handball which was greeted with red and yellow confetti in the away end from fans frustrated that none of the decisions seemed to be going our way.  When the whistle went for half time, the referee was booed off by the Watford fans.  In all honesty, it had been a scrappy half, the play had been end to end but there was little in the way of decent chances.

Deeney had a fantastic chance to put the visitors ahead early in the second half after Forestieri and Vydra broke forward, but Fernando’s shot from Matej’s cut back flew well over the crossbar.  The home side threatened after Andrews failed to clear, Williams hit a shot wide of the far post although it didn’t seem to concern Gomes who just stood and watched it drift wide.  A cut back from Murphy was cleared by Ekstrand.  Murphy then received a ball over the top and hit a shot that required an excellent save from Gomes to turn it over the bar.  The keeper’s sterling efforts proved unnecessary as the flag was already up for offside. 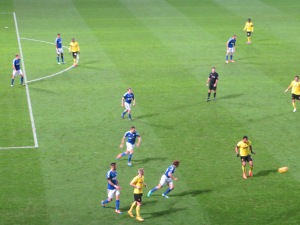 Deeney on the ball

Ekstrand was the next Watford player to be booked as he fouled Williams to stop a breakaway.  That was the midfielder’s last involvement in the game as the injury that was inflicted by the tackle meant that he couldn’t continue.  He was replaced by Bishop.  The resulting free kick was punched clear by Gomes.  Hunt tried to lob the keeper, but the ball ended up on top of the net.  Watford had another wonderful chance as Vydra broke forward, he crossed for Forestieri who really should have hit the target, but he blasted his shot over the bar.  Then Hunt broke into the Watford box, Gomes bravely saved at his feet but they had come together with some force so the keeper needed treatment.  Bond readied himself to come on but Gomes eventually got back to his feet and was judged fit to continue.  On 70 minutes some lights appeared in the Ipswich crowd.  I have no idea what they signified and they were gone as soon as they appeared, but it was very bizarre.  On 73 minutes, Jokanovic made his first substitution as Forestieri made way for Ighalo.

A poor pass from Vydra allowed McGoldrick to break so Munari took the forward down and received a yellow card that he accepted with a handshake.  Bru had a great chance to put the home side ahead when a corner was cleared to him but he volleyed just wide.  The same player threatened the Watford goal again soon after but his shot was met with a brilliant catch from Gomes.  At the other end a Deeney cross found Ighalo free in the box, the flag stayed down but the Nigerian’s shot was blocked for a corner.  Increasingly it appeared that one goal would win this game.  Unfortunately that goal went to the home side.  Watford failed to clear from a free-kick, the ball bobbled around the box before falling to Smith who hit it past Gomes.  It was a scrappy goal that summed up the game.  There were a couple of late substitutions with Murray coming on for Andrews for the visitors and Sammon replacing McGoldrick for the home side.  Watford waited until the last minute of the six added on before attempting an equalizer, but the shot from Munari was blocked by Bialkowski and the three points stayed in Suffolk.

So, after a nine game unbeaten run, we had suffered two consecutive defeats.  Both performances were disappointing, but two draws would probably have been fair as neither side dominated in the games.  We now have the international break to regroup.  The last two breaks have seen the Watford manager replaced but that is very unlikely to happen again, so Jokanovic has two weeks to plot the downfall of Derby whose recent blip appears to be over.  Despite the disappointment of the last couple of games, I am really looking forward to that encounter.